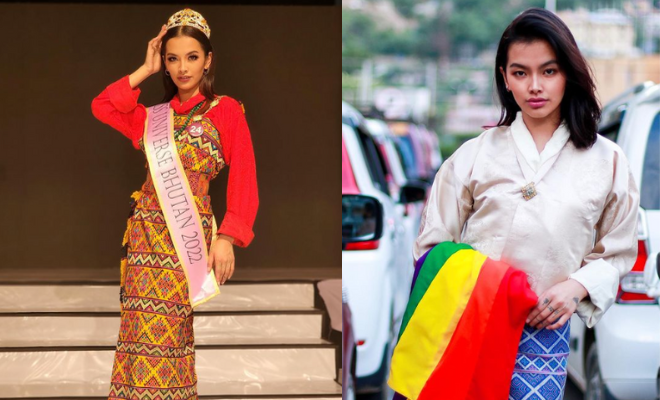 June is a special month on the calendar because it is also Pride Month. The whole month is dedicated to celebrating queerness and making people more aware of the LGBTQIA+ community’s rights and instilling sensitivity in people when it comes to them. With much pride, I am today sharing with you guys the story of Tashi Choden Chombal, who became Bhutan’s first queer person to win the Miss Bhutan title! If you want to know more about her, here’s all the information you need.

As per a report by The Bhutanese, Tashi Chombel is half Tibetan and half Bhutanese but was born in Nagaland, India. Her parents married and moved to Nagaland. But tragedy struck Tashi who lost her father when she was just four years old to illness and also her mother when she was just 14-years-old. Speaking of them, Tashi said that they both suffered from medical conditions and had tried to fight as much they could to emerge from it.

Tashi and her siblings were raised by her maternal aunt and grandmother. Reflecting on the period of struggle, Chombal said that she had to ‘pick up the pieces and set the right example for her siblings as well’. She realised modelling was her calling when Tashi was just 15 and came across the Project Bhutan started by model Paljor Gyabak.

Tashi Chombal was one of the first openly queer persons in Bhutan. She first identified herself as a bisexual and after doing research and understanding herself, she realised she is a lesbian. She became the first queer person from Bhutan to have won the Miss Bhutan title and is now on her way to participating in the Miss Universe 2022 pageant.