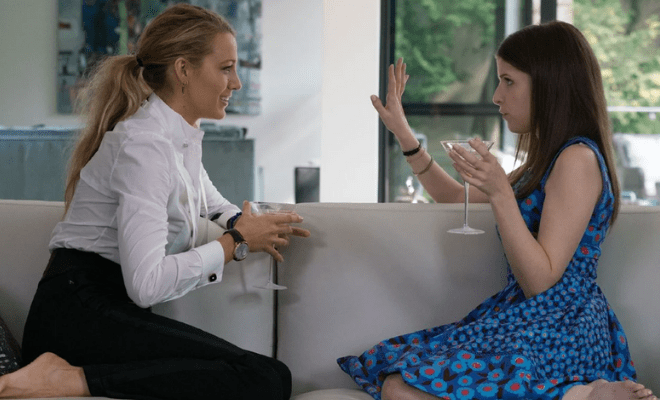 ‘A Simple Favour’ Is Getting A Sequel, With Blake Lively And Anna Kendrick Returning. Yes To More Cocktails And Sexy Pantsuits!

While it is common to see on-screen chemistry between actors of opposite genders, there are few funds that are able to capture the interactions between the same gender relationships and do them justice. One of these movies was the 2018 comedy-thriller A Simple Favor starring Blake Lively and Anna Kendrick. A sequel to the film has been given a go by Amazon and Lionsgate and to say that I cannot wait is an understatement.

Blake Lively and Anna Kendrick will be reprising their roles as Emily Nelson and Stephanie Smothers in the sequel of A Simple Favor. Jessica Sharzer will be writing the sequel, having written the first part as well which followed a mommy blogger, Stephanie Smothers (played by Kendrick) who tries to solve the disappearance of her elegant and mysterious friend, Emily Nelson (played by Lively) from their small town. A Simple Favor is based on a book by Darcey Bell by the same name.

Also Read: Ryan Reynolds’ Reaction To Blake Lively’s Met Gala 2022 Dress Reveal Has Tweeple’s Attention And Can We Blame Them?!

According to sources, director Paul Feig and Laura Fischer will produce for Feigco Entertainment with Sharzer as the executive producer. A Simple Favor was a hit earning $53 million at the domestic box office and $97 million at the international box office.

Also Read: Was The Book Better Or Movie? Let’s End This Age-Old Debate Once And For All

Blake Lively is going to be seen making her feature directorial debut with Seconds for Searchlight Pictures which is based on a graphic novel by Bryan Lee O’Malley. Feig will be releasing The School for Good and Evil on Netflix next and is represented by CAA and Sloane Offer. Anna Kendrick is all set to next be seen in Alice, Darling, a Lionsgate feature.

Get Ready To Witness The Return Of Grandeur With Met Gala 2022’s Theme ‘Gilded Glamour.’ Anthony Bridgerton, We Hope To See You There!