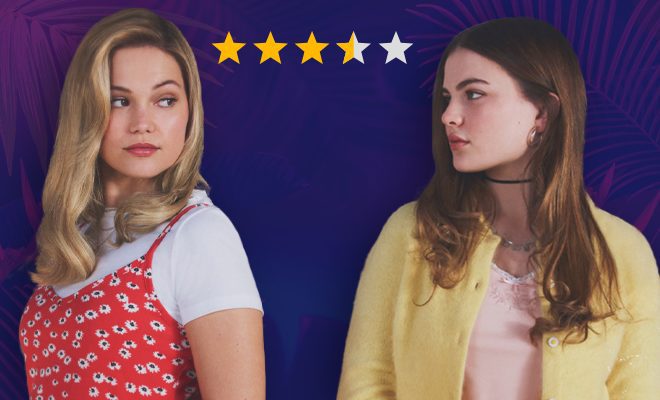 As an Indian woman who spent the last 15 years of her life watching American teen dramas, I have been convinced that high school is cutthroat, and teenagers can be quite cold-blooded and more ruthless than adults sometimes. It may all be exaggerated for the screen, but it has sure given us some bingeworthy material like Pretty Little Liars, The OC, Cruel Intentions, Gossip Girl, Elite and more. The latest entrant to this club is Cruel Summer, a new series on Freeform which is available to Indian audience on Amazon Prime Video. Created by Bert V. Royal (screenwriter of the Emma Stone starrer, Easy A), the teen drama thriller stars Olivia Holt, Chiara Aurelia, Froy Gutierrez, Harley Quinn Smith, Allius Barnes, Blake Lee, Sarah Drew, Michael Landes, Nathaniel Ashton, Barrett Carnahan, Andrea Anders, Ben Cain, Brooklyn Sudano and more. It is produced by Royal along with Max Winkler, Tia Napolitano, Michelle Purple and actor Jessica Biel.

I was lucky enough to catch the Cruel Summer pilot at the SXSW Film Festival where it premiered. The pilot, and as I found out eventually, each episode showcases the events that transpired in three different years—1993, 1994 and 1995—around the same dates from June to October, parallelly. In the summer of 1993, Jeanette Turner, a dorky girl with braces and an eclectic taste in fashion and accessories, makes an elaborate list of low-key illegal things to do during the holidays with her two friends, Vince and Mallory. This involves breaking into the house recently sold by her realtor father to a Martin Harris, the new assistant principal of Jeanette’s school. Meanwhile Kate Wallis, the prettiest girl in town and in school has seemingly a perfect life—her mother and stepfather love each other and her. Her boyfriend has given her a promise ring. And she isn’t aware of Jeanette’s existence, or her obsession with her, or Martin Harris.

Exactly around the same summertime, in 1994, Jeanette Turner is a transformed girl. To an outsider, it would look like she has taken over Kate Wallis’ life. Her hair is straighter, braces are gone, she dresses in the latest trends which she shops with Kate’s two girl friends. Oh and she is dating Kate’s boyfriend too. Where’s Kate, you ask? She’s missing, has been for the past couple of months and by some, even presumed dead. That is, until she is found very much alive after the cops killed her abductor in a shootout and rescued her. Kate’s abductor turns out to be Martin Harris, and her prison was the same house that Jeanette broke into all that while ago. As if it isn’t already an awkward situation for everyone who moved on from Kate and accepted Jeanette, shit hits the fan when Kate accuses Jeanette of finding her in the house much before the cops did, but not helping her or alerting the cops.

In 1995, which is present day in the series’ timeline, Jeanette is a pariah, her life and those of the people around her ruined. She’s looking at a court case. Kate, on the other hand, is dealing with her trauma, hiding secrets about her abduction, and realising she is no longer the girl she was two summers ago.

If you think this is too convoluted, then let me assure you that distinguishing between the timelines is not going to be a problem. Each timeline has an obvious colour palette that gets progressively darker. And production and the costume and hair department have managed to put together distinct styles for each character as they grow older and bolder with expressing themselves as who they are through makeup, outfits, hair, and even their music/movie choices which bring out the 90s vibe strongly (‘Zombie’ by The Cranberries got stuck in my head!). Credit due to the actors too, particularly Olivia Holt, Chiara Aurelia, and Harley Quinn Smith for doing the rest and making the transition stand out.

If I were to summarise, Cruel Summer is the story of two girls whose lives get turned upside down because of an incident. It cascades into estranged friendships, broken relationships, unexpected allies and some legal drama, all because teenagers would rather suffer and take their secrets to the grave than simply tell the truth and confide in the grown ups trying to help. Can’t blame them either, because some of these grownups make questionable choices themselves and are really messed up. And with this being a small town with a clear class divide that forces the residents to keep up appearances in the community, the secrets only get further buried.

Usually, when the above is the case, I’ve often found myself calling out characters for making some truly stupid decisions (Read PLL turning random main characters into A or A’s allies temporarily). Luckily, Cruel Summer didn’t give me any occasion to do that. What made me like the show even more was that they didn’t make the beautiful Kate Wallis a mean girl, or the dorky Jeanette Turner a miss goody-two-shoes. These characters motivations stem from where they are at psychologically, and the groundwork for their mental health issues is laid well through broken family dynamics, the desire to be popular and loved, peer pressure that can turn into bullying, and getting to terms with one’s sexuality.

I will admit though, that Cruel Summer is a long one. With ten episodes, it takes its time to slowly build up the fictional town of Skylin, Texas, and the circumstances which drive these characters to act the way they do. But if you can make peace with the pace, rest assured that there aren’t any dull, boring, or unnecessary moments in this one. All of it only helps you get to know these characters a little better. And when, despite all of that, you’re still unsure of who did what and why until the big reveal, it speaks to just how well the thriller has been crafted. Not all is revealed right away, and having too many unreliable narrators makes it an interesting puzzle that you as the audience piece together. And yet, in the final scene, there’s something that makes you gasp, building up excitement for Season 2 already, which FYI has been greenlit.

Cruel Summer was pretty much unputdownable for me once I began. But apart from the obvious thriller element, it was interesting to see how the show tackles themes like PTSD, grooming and domestic abuse (the opening slate contains trigger warnings). It isn’t always overt, and if you were to talk about Kate’s confinement, it is shown in an all-too sanitary way. Yet, the series manages to satisfactorily explore the themes that it intended to, showing just how they might impact young, impressionable minds and influence their actions.

We’ve all enjoyed our fair share of teens gone dark dramas, and it’s a genre that will never not be appealing. But I think I am now ready for shows like Cruel Summer that lay the groundwork thick with some real issues from whence the teen drama can justifiably emerge. To quote TV bad boy Damon Salvatore, “If you’re going to be bad, be bad with purpose.” Here, these girls might not have ‘purpose’ as such, but when you as an audience understand the motivations for their actions and realise they’re actually victims of their circumstances, it makes it harder to choose a side And that’s the most delicious dilemma.

Watch Cruel Summer for the twists and turns, for its parallel storytelling format, for the lead actresses’ performances and for the themes it explores, proving that this world we live in puts undue pressure on teenagers, pitting teen girls against each other, and turns them ruthless enough to make true crime documentaries or fictional TV shows around them.