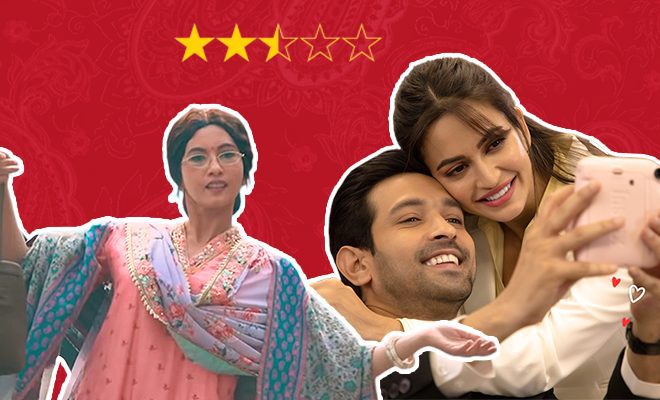 As a storyteller, it often becomes hard for me to instantly dismiss something I watch. I give it a chance to woo me, reason with me, impress me with its many offerings, or simply, just let me have a good time. When it came to 14 Phere, I had two major reasons to do this. One, director Devanshu Singh, who previously gave us Chintu Ka Birthday, a film that I loved. And two, well, I am a huge Vikrant Massey fan. I mean, who isn’t right? The film stars Massey, Kriti Kharbanda, Gauahar Khan, Jameel Khan, Yamini Das, Vineet Kumar, Sumit Suri, Govind Pandey, Manoj Bakshi and Priyanshu Singh. And the trailer, though confusing (because it is a comedy of errors after all) was funny thanks to the collective comedic prowess of this ensemble cast and the premise itself.

However, as I approached 14 Phere, there were two major concerns as well. First, the film employed the ‘fake parents’ trope, which may not have been used in this exact context before, but has been used plenty on screen, sometimes the to the point of insulting the audience’s intelligence. And second, the film revolves around a very sensitive and serious topics, that of a couple in love who wants to do an inter-caste marriage and in the process has to dodge honour killing at the hands of their families. Addressing these with the much needed sensitivity while maintaining the light tone of the film was going to require some masterful balancing act on the tightrope. Rest assured, it wasn’t going to be an easy feat.

I’m going to say, 14 Phere is an enjoyable watch for those two hours you spend in its world. Because it is a world where everything comes rather easy to its characters, and the ugly is easily swept under the rug by the rosy. Aditi is Sanju’s senior in college, where they meet, fall in love, graduate, and even end up in the same office, senior and junior once again. They move in together in a dreamy apartment too, and we get all this in a montage that, to my love-deprived single heart, was instantly endearing.

However, there’s a rational voice fighting to gatecrash this dream setup, when we get to know more about them. For example, you wonder why the couple’s immediate families and even extended relatives who are shown to be hanging around the same city, never drop in to meet them, thereby exposing their situation. There’s definitely a mama, and Aditi’s elder brother is shown to own a bar in the city itself. So what gives?

Sanju is a theatre artist on the side, and it is during a rehearsal, where ‘Dilli Ki Meryl Streep’ is playing his mother, where inspiration strikes for this ‘fake parents swap and double wedding’ idea.  Aditi isn’t convinced initially, because she somewhere has the same concern I did—this isn’t just a simple case of DDLJ where their parents are opposed to a love marriage. No, this is a case where caste and social enmity is a massive issue, and thereby so are pride and honour. The couple casually drop hints to just how normal honour killing is in their families. And in fact, the threat sinks in deeper when the side track of Sanjay’s sister is introduced, as his father hunts for the daughter who runs away with a university topper doctor instead of marrying someone from their caste.

Aditi has another option handy—move to America for work and away from their families. And yet again, it falls into their lap so easily, that now not just my single self but my professional self was also jealous. In fact, in a real, practical world, that option seems like the couple’s safest, most hassle free bet. But Sanjay’s emotions, particularly his concern for his mother being left alone, pushes them ahead with a very Raj from DDLJ-esque mission briefing: If we can’t convince them, confuse them, but hum nahi bhaagenge.

What happens after follows a very predictable plot, where the couple is just emboldened by beginner’s luck with one wedding going smoothly, when disaster strikes, setting things in motion that are bound to crash the second wedding.

Let’s talk about what works in 14 Phere: The emotional moments, and the actors, and that end credits song I’ve been humming

Vikrant and Kriti as Sanjay and Aditi make for a very endearing couple, and that’s one thing that I don’t mind coming easily. There’s actually a lot to explore in that dynamic, of how Aditi who has always been the senior, who is mind over heart and unapologetically so. And yet, a lot of the decisions in their relationship are directed by heart, which is Sanju, who Vikrant Massey in my interview with him, described as a hustler. Both characters and their relationship with each other, even their disagreements and motivations, are something that didn’t feel frivolous but real.

Particularly, I loved how Sanjay’s concern for his mother transfers effortlessly to Aditi upon marriage. The whole sequence is set in a song about after wedding rituals. And sure, while at first though it does look too simple perhaps even sexist that someone like Aditi could be won over with ‘maternal emotion’. But the song made for a beautiful moment, where a newly-wed woman who didn’t know what to expect of her in-laws—which is the case for most arranged marriages—was overwhelmed with just how comfortable her MIL made her feel. It’s not exactly unfathomable because as Kriti said during the interview, Aditi might be calculative and practical, but she isn’t devoid of emotion, which is why she agrees with Sanjay’s plan in the first place.

Speaking of emotional, I think my favourite moment from the entire film was the scene where Sanjay, at his wedding, steps aside to talk to his sister on the phone.

The cast is full of some pretty talented actors, like Vineet Kumar, Yamini Das and Jameel Khan, but they don’t exactly get much space to play around, since most of the comedy is for the premise itself to invoke as opposed to the characters’ shenanigans. Gauahar Khan, though, gets to have the most fun with her character and made me wish there was more of both her Meryl Streep and Mom avatars to see. Accompanying her’s, Sumit Suri’s “maine isko kahin dekha hai” act is also fun to watch.

In fact, one thing that I was thankful for was that none of these scenarios were stretched to breaking point where a family member constantly pokes holes in the lie and the lie still stretches to accommodate it. I feel like that really insults the viewer’s intelligence, a crime that 14 Phere very narrowly dodges, if not entirely.

And finally, I do like ‘Chamak’ which plays during the end credits. The ladies look stunning, the hook step looks fun, and I will take any chance to watch Vikrant Massey move like that. But also, the lyrics are fun and keeping with the current trend of Hinglish, without being derogatory or full of innuendo. I’ve been humming it since I watched the film.

What doesn’t work: The levity is a guest that overstays its welcome

As I’ve mentioned before, 14 Phere has many elements that make it a likeable, enjoyable watch. It never made me throw up my hands in exasperation, or feel the runtime. It’s weird actually, because I didn’t even feel the runtime for Toofan which was almost three hours. But it could possibly be because after watching a lot of intense, heavy-hitting content (Gosh, I hate this word!), I am now enjoying this light-hearted, simple storytelling that gives me something I can enjoy with the family, without worrying too much about the politics of it, or the morality of its characters or whether liking this film/series makes me look dubious too.

And that was my prime expectations from 14 Phere, to be that fun family drama with a social message, which might end predictably but could be fun on the way. Which it fulfils to a decent extent. That being said, try as I might, I couldn’t completely forego the ‘social’ bit of this social comedy.

I think the solution that the film offers in its final moments is very practical. “What doesn’t know won’t hurt them” or “If you don’t talk about, it doesn’t exist” are both tactics that Indian parents are all too familiar with. And that’s exactly what their children are now suggesting they do about this issue of ‘samaaj’ and ‘izzat’. For the audience that this message is intended for, if they open up to it, this could be a nifty little solution that they could make peace with.

However, the film’s final act is also the one that lets levity overstay its welcome. The fact that this couple could face serious death at the hands of their family is dealt with too lightly. And it all just becomes hunky dory too easily too soon, which has been my constant peeve with this film. It’s all too easy.

14 Phere is enjoyable for its intended audience, but could’ve been better. Definitely, thumbs up for suggesting a practical solution! If an enjoyable, light-hearted weekend watch (even with the fam) is what you’re looking for, 14 Phere will do the trick.