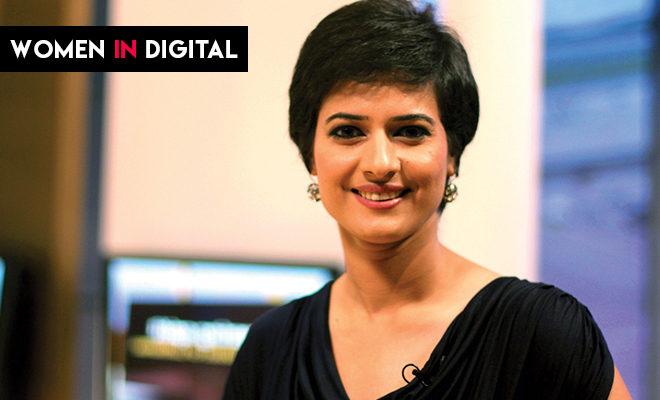 Shaili Chopra: “You Take A Chance On Yourself, Go Up That Hill, And Make It Happen!”

In a time when business journalism wasn’t quite a common profession for women, Shaili Chopra thought differently. Being an Economics Honours student, she wanted to apply her academic knowledge to her passion of journalism — leading her into the primetime space of television as an anchor and editor.

From interviewing nationally and globally renowned names in the industry, to breaking stories in the financial sector, and covering the Taj attacks in Mumbai in 2008, at a young age, Shaili had pretty much done it all. And that’s what drove her to take a chance on herself and experiment with something new.

Shaili then launched She The People, one of India’s largest women’s platform, which engages with more than 1,00,000 real women, with real stories to tell, which, according to Shaili, go beyond just vanity.

And believe it or not, when she spoke to Hauterfly about her journey and those not-so-eureka moments a few weeks ago, she was just about completing the third trimester of her pregnancy. (P.S. We’re happy to report she’s a new mother to a bonnie baby girl — congratulations, Shaili!). Contrary to popular patriarchal belief, she is in no way letting that hold her back. Here’s why.

I had 20 years of experience in media, of which nearly 15 years were spent on television as a primetime anchor on NDTV Profit and ETNow. At the time, I was studying journalism, and business was something dear to me — I am an Economics Honours student — so I was really keen to put my academic understanding into my work.

I was a television presenter and editor for nearly 15 years and have interviewed people like Warren Buffett, Steve Ballmer, Christine Lagarde, Tiger Woods — some of the world’s best names! Luckily for me, I started early and grew through the ranks at an early age, so by the time I was at the end of my 20s, I was already at a significant position in the channel, playing the important role of being the female prime-time anchor.

As a young person, I sort of had a 5-year itch — it was easy to get complacent and definitely easy to just stick around and be happy with seeing my face on television. So a time came in 2012 when I woke up one day and asked myself, “Who is left for you to interview at this time in your life? Who do you really want to interview?”.

And the answer to that was hard to find. I mean, it doesn’t get bigger than Warren Buffett, does it? So that’s when I decided that I was just going to get up and leave, which was also at the peak of my career at the Times Group.

The reactions were mixed — a lot of people who had blinkers on about the future of media actually thought it was stupid. And, of course, there were those who knew me for years, knew I wouldn’t be happy just getting my pay cheque every month. They knew I probably had to do something that would keep my learning curve moving.

And that, to me, is of primary importance – I honestly can’t find myself stagnant so early in life.

Tell us a little bit about what makes your company special/different.

I started She The People, which is meant to be India’s largest platform for women with real stories — real women doing real work. We’ve interviewed more than 100,000 women and are looking to cover women beyond their interest in vanity.

Going beyond the media platform, we regularly engage with these women and have created a network, engaging with them on their skills. She The People works with global brands, such as Facebook and Google, to reach out to women in small business arenas in India, and looks at how economic empowerment is changing the lives of these women.

At what point in your journey did you realise you had something special on your hands?
It was not one of those eureka moments. I realised that digital was an interesting space to be in when I started my first business, Golfing India, as I figured it met a certain need. And when I started She The People, another question struck me — so I picked up magazines, newspapers, existing old-school websites, and wondered what they were doing with women.

And you know what? They were the same 10 women everywhere — out of which 8 were from Bollywood and the rest were chairwomen of certain banks. It wasn’t about the woman actually, but about that chair, and it was frustrating.

Are you telling me that in a country that is so vibrant, that has almost 600 million women (which is 8% of the world’s population) that women aren’t doing enough to run this entire economy? I think they are, and it’s just not being talked about. Where are these numbers being showcased, where are their stories?

It is not about yourself, it’s about everyone, and I think, for us, the primary headline has been to be a survivor in the startup place, which has been traditionally male dominated. I think that, in itself, was the biggest reward, and the biggest challenge.

Where do you think you’ve had your biggest struggles, and how have you overcome them?
I think the biggest struggle for anybody is to convince yourself that what you are doing is the way forward. You wake up with an idea, you follow it up, and build on it — and then you think, will this scale up or not?

The biggest struggle is yourself – you are the biggest challenge and your biggest champion. Sometimes, you’re in spaces that are brand new and you’re making that road – one that’s never been made before. And everybody around you has only one question. What is your business model? And you know what? Mine is a model that has a cause, an effect, and a plan, in terms of reaching out to a certain audience, and it does make money as well.

Any challenges you face as a digital company versus a legacy media publication? How do you think you score over legacy media?
It’s a good challenge — to keep up with technology and know where your audience is moving, what they’re embracing, how soon can you play catch up or stay ahead of the curb. That, specifically, comes with the beast that is digital.

There’s this constant need to fetch, but at the core of everything, it is the community that you create who actually believes in what you’re doing, and therefore, will go anywhere with you.

What, in your opinion, is the best thing about being a digital company?
You can embrace change quickly.

Lessons you’ve learned along the way that hold you in good stead today?
The one and only lesson – always take a chance on yourself. I never went into anything blindly, I went into it with open eyes and stared back in its face, because I always felt that it was so easy for me to fall into the trap of self doubt. Every time I have taken a chance on myself, I haven’t felt bad or regretted it, and I think the reason for that is because I went in it myself rather than follow someone else.

You take a chance on yourself, go up that hill, and make it happen — that is what matters!

Do you think building a business as a woman — raising money as a woman — has more challenges?
In my personal experience, I have been championed by men. I have been in conversation with men who believed in my business and decided to help me out. The one person in the public domain of doing this is Anand Mahindra, who backed my plan. But even now, as I am raising money, I am in talks with men.

There is, however, a distinct problem in raising funds as a woman entrepreneur. Many women I have spoken to have been questioned on things like what they’re going to do when they’re pregnant, how they’re going to manage when on maternity leave?

Let me tell you, I am eight and a half months pregnant, and am in the full flow of raising money. As soon as the baby pops out, I am going to be out on the road raising money again. (Ed’s note: Shaili has since given birth and already back into the thick of things.)

If you had to go back and start over, is there anything you would do differently?
Maybe I would like to grow faster or embrace digital even earlier than I did. I would want to speed things up, and would probably try and compress time further. Otherwise I am quite happy that I left when I did.

What else can we expect from your website in the future? Where do you go from here?
We want to get more than 100,000 women on the platform. We are already in Hindi and English, and now, we’re going to launch in 8 other languages as well, besides creating 5 times more content than we are today. We also want to get more men into the conversation.

Basically, we just want to grow, grow, and grow!