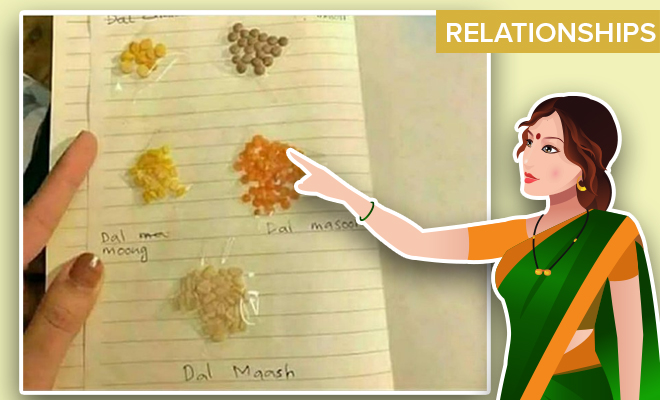 #Relationships: A Mother’s “Daal Manual” For Her Son Before His Wedding Is Going Viral. It’s Important That Men Have Basic Life Skills

I like cooking once in a while, but I do get confused with some similar looking ingredients. It hit hard when the lockdown started and I went to the grocery store to buy essentials; I had to ask the shopkeeper if it was a packet of jeera or saunf. That’s when I was like, this requires my own intervention if my mom is spoiling me. It’s not like I don’t cook; in fact, there are some dishes that are my specialty. But it’s really rare. However, I sometimes follow recipes on YouTube to whip up some dishes.

So while I am using this period to brush up my cooking skills, I do expect my future husband to be doing the same – wherever he is or if he exists. I am not expecting him to be like a chef and know everything. But the willingness to follow a YouTube tutorial is like a basic necessity. Unfortunately, most Indian mothers end up handicapping their sons by leaving out the cooking lessons from their upbringing. Several Indian mothers just don’t know what healthy love is and that it involves raising your son to be an independent man who understands the concept of consent and equality. It is definitely not spoiling your son so badly that he grows up (barely) to become a manchild.

A mother made this for his son 😍
who is getting married Soon. 😜😜 pic.twitter.com/7ya9WF4W7k

Thankfully, a woman set an inspiring example for other mothers as she made sure her son gets his lessons and made a ‘daal manual’ so he can refer to it when confused. Do you remember how we had to make those charts in school? We were asked to stick lentils and all that so we know what is what and don’t grow up to be dumb. I wish they had asked to differentiate between moong and masoor and jeera and saunf.

This was shared on Twitter by Dipanshu Kabra, an IPS officer from Chhattisgarh with the caption, “A mother made this for his son Smiling face with heart-shaped eyes…who is getting married Soon.” Before I move on to the wonderful insights people sent across, I’d like to call out an over smart troll who completely deviated from the point. He wrote, “Wonder how you cleared the Indian Police Service with such English. ‘A mother made this for “her” son…’ is the correct usage.”

I wish every son has mother like her who help her son to become #AatmaNirbhar .. 😂😂

A user said most men simply know how to make instant noodles and now it’s high time they learn how to make real food. Another user wished every son has a mother like her, “I wish every son has mother like her who help her son to become #AatmaNirbhar.” Someone expressed delight over stereotypes finally being broken. “If what is mentioned is true, then this mom is breaking the stereotype and making her son’s and her daughter-in-law’s married life  a happy place and giving a food for thought to all those who still feels that Kitchen and household chores are not men’s arena,” she pointed.

Now we don’t know if this picture is taken out of context or not; there’s no way to verify it unless we know the source. However, what is really inspiring that men and women flooded the post with comments insisting that mothers must teach their sons cooking, which according to me is a life skill everyone should possess.

Good mother. She knows exactly what is the nicest lesson for her son i.e. Wife is life partner, not unpaid maid. Don’t burden her. Share your happiness and her responsibility.

For the sake of all women

I understand the mothers love their sons but it’s really important for them to raise them in a culture where equality is the norm. Which means, being interested in giving your children the same opportunities and lessons, irrespective of their gender. Daughters’ career shouldn’t be treated like a mere hobby and it should never be enforced that domestic and family responsibilities are women’s jobs. Because it is these boys who grow up to become men – and their wives suffer because they have to compromise on their job and cook for a husband who couldn’t be bothered to learn some basic life skills. They are forced to live up to the benchmark their mothers have set and it’s unfair.

“It used to be that men assumed that their wives would do all the housework and parenting, but now that women are nearly equal participants in the labor force, men are assuming more of the tasks that it takes to run a home and raise children,” sociologists Scott Coltrane of the University of California, Riverside said, analysing the data of a research. Lack of gender equality has larger and graver implications but speaking strictly from the perspective of its role in marital relationships, this is a major consequence. “Good mother. She knows exactly what is the nicest lesson for her son i.e. Wife is life partner, not unpaid maid. Don’t burden her. Share your happiness and her responsibility,” a man wrote.

ALSO READ: 10 Signs Your Boyfriend Is A Feminist And You Should Hold On To Him!

There are several things that I didn’t learn in my childhood but hey, it doesn’t stop me from learning those now. I am a grown up and can rationalise. I am not an ape, right? So we have a lot of literature available, and there are videos. They can definitely learn to cook! And if they can’t, it’s a deeper, more misogynistic rot that has to be addressed. And that definitely won’t be a partner for me! Did you know that several researches say that women find men who are domestically not handicapped, irresistible? Because we see it as a sign of equality and respect and an indication that we won’t have to suffer in a partnership with them. Who wouldn’t find that irresistible? According to research conducted in the Love Labs of Dr. John Gottman at the University of Washington, women whose husbands cook and do other chores are “in the mood” more often.

Also, research says that children who grow up in a family culture wherein their dads cook are much more socially likeable. “When men perform domestic service for others, it teaches children cooperation and democratic family values,” said Coltrane. In fact, it’s even better when they have fun cooking sessions together. The kids are also less likely to be rebellious and believe in having a pleasant social life, says the same study. Men learning to cook can solve a lot of issues! That’s just the tip of the iceberg but hey, we begin somewhere!

ALSO READ: This Article About ‘How To Raise A Feminist Son’ Came Out in 2017 But It Is Just As Relevant Today. In Fact, Even More