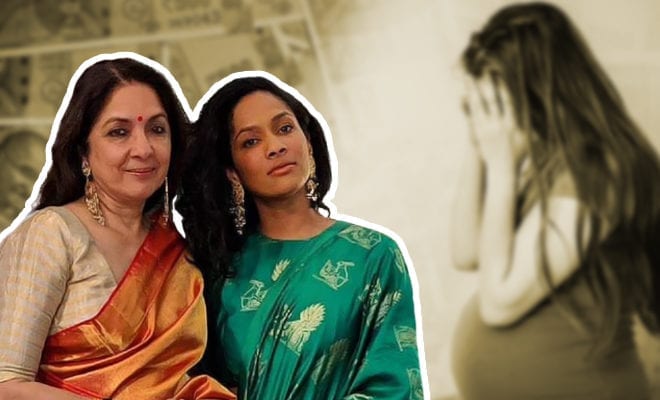 Neena Gupta Didn’t Have The Money For A C-Section. Her Father Dismissed It As Unnecessary

Although she played mother to Kanwaljit Singh — who is eight years younger to her — in Sardar Ka Grandson, her character was so refreshing! Neena Gupta played a daadi, who shares a peg of whiskey with her grandson, pouring their hearts out about their respective lovers. Her infectious mischievousness in the way she gets her grandson to blurt out what happened, was just so heartwarming.

She has a plethora of unconventional feathers in her hat that are so typical of her nonconforming nature. In Badhaai Ho, Neena Gupta played a woman, a mother of grownups, who accidentally gets pregnant. The couple were shamed by the society but she held her ground, she went through with the pregnancy.

Years ago, when Neena Gupta was pregnant with Masaba, her out of wedlock pregnancy wasn’t supported by our culture. Not many people have awakened to de-stigmatise it even today, back then, that number was probably negligible. She was ahead of her times, yes. But behind that strong exterior, was a woman, who had her own share of difficulties and anxieties. With limited financial support, it wasn’t the easiest for her but oh boy, has she created a beautiful life for her daughter and herself.

They say some lives are worth writing about, and we’d read the hell out of Neena Gupta’s if there was a book on it. Turns out, she penned down her autobiography Sach Kahun Toh, which is heard to be a tell-all kinda one.

Recently, Masaba Gupta took to Instagram to share an excerpt from the book and my jaw dropped. The excerpt read: “As my due date approached, I started to worry because I had very little money in my account. I could afford a natural birth because it would cost only Rs 2000. But I knew if I had to have a C-section, I would be in trouble because the surgery cost almost Rs 10,000. Luckily, a tax reimbursement of Rs 9000 came through a few days before my delivery and I finally ended up with Rs 12,000 in my bank account.”

“Good thing this money came through, because my doctor informed me that I would need a C-section. My father, who had come down at the time to help me through the birth, was livid. He said this was a ploy to just charge us more money,” Neena writes. At this, I just feel like yelling Rachel’s dialogue from Friends, “No uterus, no opinion!”

Why do people underestimate a woman’s pain? Because men have never gone through period cramps, pregnancy labour and the pain of delivery, they should probably just listen to what the woman says. You know, like the scene in Good Newwz when Kareena is delivering and the male doctor says something on the lines of ‘Oh, well, relax, it doesn’t hurt so much, I do this every day.’ Nope, definitely not the same.

Thankfully, Neena Gupta was able to pay for her C-section; her father was clearly not convinced she needed it. Financial independence does help you make your own choices!

Sharing the excerpts, Masaba wrote, “When I was born, my mum had Rs 2000/- in her bank account. A timely tax reimbursement would bump that number up to Rs 12,000/- and ofcourse I was a C-section baby.” She expressed that she was awestruck learning about the many hardships Neena Gupta went through and emerged a winner. In fact, she wrote that it motivates her to work very hard, be financially independent and stand for what she deserves so she can “pay her back” (with interest!) for giving birth to her.

Neena Gupta said in an earlier interview that she hopes this book — that describes her journey as she navigated a lot of hardships — to motivate many people to believe things will be alright. Oh yes, we need that during the pandemic.