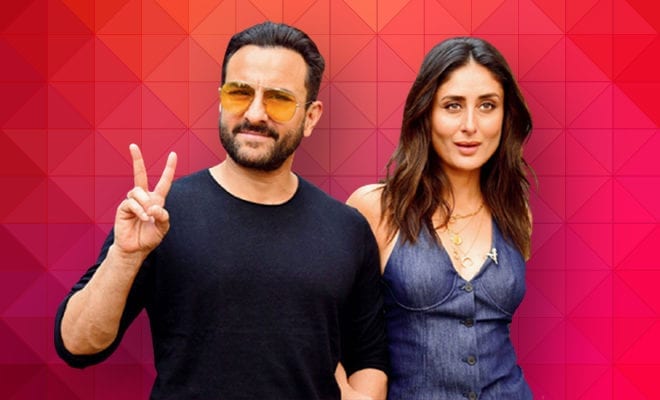 When Kareena Kapoor Khan and Saif Ali Khan started dating, they were met with a lot of criticism. People were dealing with Kareena and Shahid’s breakup and it all pointed towards Saif being the reason behind it. There were all sorts of hateful rumours about them. You know, the typical sexist remarks – “she is after the money” “He just wants her for her youthful beauty”. They thought it was a rebound, a passing affair but turns out, in Saif, she found her life partner and one true love. And it all started on the sets of Tashan (2008).

Now Kareena and Saif had done a few films before that but it was during the shoot of this movie that the duo’s relationship went from being platonic to romantic. However, while it looks like it would have been Saif who offered his support to a grieving Kareena and wooed her, it was quite the other way around.

Kareena revealed that not Saif, but she was the one who made the first move and other important moves to take things forward. She had told Niranjan Iyenger in an interview, “I was the one who kind of pushed all the right buttons. Saif actually was the kind of guy who will never, is not very forthcoming towards any woman. He will never make the first move. He’s too English and restrained in that way.”

She added how Saif actually acted surprised that Kareena was interested in him. “It was like entire building had crumbled on his head. So I don’t know what he meant by that, whether he thought he was very lucky or what. But well, eventually, it all worked out and I think I was responsible for it,” Kareena revealed.

Honestly, Saif’s reaction is truly hilarious. Maybe because Kareena and Shahid had such a strong affair and he didn’t know if she was willing to move on soon. But I’m so proud of this gal because she didn’t sit around, crying over spilled milk. She cried, wiped her tears and embraced love, once again.

Was there a point where she wasn’t completely over Shahid but was getting involved with Saif? Kareena and Shahid signed up for Jab We Met before things changed in their lives. But turns out, their decision of going ahead with it did them wonders. “I think we just had to kind of do this movie at this time when Tashan was being made…and I met Saif. So I kind of did Tashan for that actually…when I actually thought that that was gonna change my life and my career. But this (Jab We Met) changed my career and that (Tashan) changed my life. Because I did meet the man of my dreams and I did marry him. And this (relationship with Shahid) kind of took its own course in which both Shahid and me went our separate ways. And this gem came out of it,” Kareena said in an earlier interview.

So things were happening almost at the same time in Kareena’s life. She was bidding adieu to Shahid and moving on to greener Pataudi pastures. Everyone was at the right place, in the right movie, at the right time.

“I remember while shooting in Ladakh and Jaisalmer, we’d go on long bike rides for some alone time. We’d enjoy the beauty, have great conversations and just bond. He helped me heal and love myself,” Kareena wrote in a Humans of Bombay post.

You know they always say that you should stay away from romance after a breakup. If you do meet someone worthwhile, they dismiss it as just a rebound. But really, does what Kareena and Saif share look like rebound? They have a beautiful family! If you know how to heal, there’s no reason to send love back empty-handed. If you find it, keep it.

Just a year into the relationship, Saif got Kareena’s name tattooed! “We were in the car one afternoon in Bandra, talking about David Beckham. I don’t know why I brought him up,” Saif told a news channel in 2009. “And then the tattoo came up, and I said, ‘Maybe I should get one on my shoulder, would it look cool?’ And [Kareena] said, ‘Why shoulder? Put it on your arm.’ I thought, ‘Maybe a nice K?’ and she said, ‘That’s a bit ambiguous.’” And then he got ‘Kareena’ written on his arm in Devanagari script. Now I see why she said, she pushed all the right buttons. You don’t give her just a ‘K’. For Kareena, it’s all or nothing!

“We’d been dating for a while, when he [Saif] said he’s not 25 and can’t keep dropping me home every night. So he told my mom, ‘I want to spend the rest of my life with her. We want to live together.’ My mom was cool with it. It’s so easy with him. Even when we decided to get married, it felt right,” added the actress added in her post. The rest is history!

ALSO READ: No Matter What Kareena and Saif Name Their Child, Trolls Will Troll. And That’s Just Sad And Pathetic.