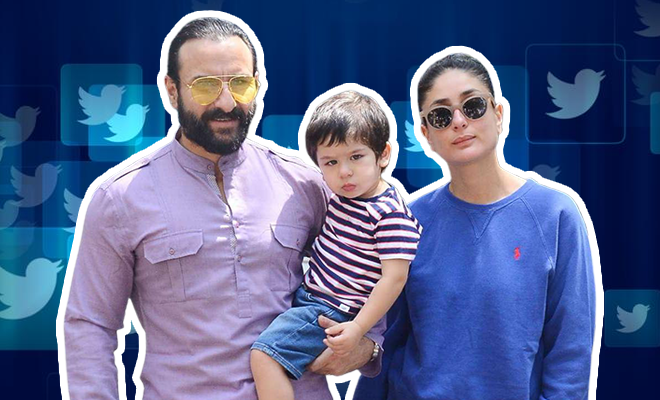 No Matter What Kareena and Saif Name Their Child, Trolls Will Troll. And That’s Just Sad And Pathetic.

I was on a small weekend getaway with my extended family this Sunday when the news flashed that Kareena Kapoor Khan and Saif Ali Khan were blessed with a baby boy, and that the adorable Taimur Ali Khan was now a big brother. As we passed around the Gujarati staple Sunday breakfast of fafda – jalebi, we all joked about how we were right in setting up this lavish spread because it was a day of great celebration. There was also a passing discussion that it would’ve been cool if they had a daughter because with those genes, the talent and the looks she’d be born with! You know, the usual frivolous conversation people have about star kids. But on Twitter that morning, things were getting, expectedly, quite ugly. Because trolls don’t care for fafda; they just want to cause more lafda on social media.

It’s not a Sacred Games-level mystery that I am talking, of course, about the discussion around this little newborn’s hitherto undecided name.

If William Shakespeare were alive right now, he’d be boggled the most by two things—Internet lingo with all those acronyms and turn phrases, and the complete devaluation of his famous sentence, “What’s in a name?” Apparently, Mr. Bard, everything. Just ask little Tim Tim’s father, who has gotten into trouble because of ‘names’ on more than one occasion (Read: Taimur and Tandav). Back when he and Kareena decided to name their son Taimur, which in Arabic means ‘Iron’, nobody cared that naam mein kitna ‘wazan’ hai. Because ‘Taimur’ sounded awfully close to ‘Timur’, the name of a Turco-Mongol ruler, whose long-time descendent Babur, was the founder of the Mughal Empire that began ruling over India in 1526.

Saif and Kareena are an interfaith couple, much like Saif’s parents, Sharmila Tagore and the late Mansoor Ali Khan ‘Tiger’ Pataudi. I’m sure no one cared much about what names the latter gave their kids, or whether they were names of any historical figures who did something. But times have changed na now. We’re regressing. So now we levy huge importance on what celebrities, especially celebrity interfaith couples, name their kids, lest just like their art, even their progeny’s name “hurts religious sentiments”. Yeah, we’re touchy about that.

So the name Taimur opened the floodgates to trolling and judgement and of course hate from certain sections that, despite Saif and Kareena’s explanation that ‘Taimur’ was not the same as ‘Timur’, continued to hate a poor newborn baby for his name.

Some even went to the extent of reminding us that nobody in Germany names their kid Hitler anymore, so why should a name that sounds like ‘Timur’ be allowed? Here’s some general trivia. Turns out, Hitler’s name is actually a clerical error made with the last name ’Hiedler’, which is his actual family name. Which immediately makes ‘Hitler’ an uncommon, if not unheard of, name already. And rest assured, ‘Hiedler’ is still a last name you’ll find in countries like Austria. In fact, according to the 2010 census in the United States, there were fewer than 100 people with the name Hitler, and there were also some who spelt the name differently to avoid the hate that comes from being the namesake of a dictator who was responsible for genocide.

The world hasn’t stopped producing children called ‘Ted’ because Ted Bundy is a world famous serial killer. Alexander is a pretty common name for boys, even though emperor Alexander carved a bloody history in his wake ti become The Great. We haven’t outlawed the name ‘Nathuram’ or the last name ‘Godse’ because a man with that name assassinated the father of our nation. And King Ashoka’s Dharmachakra and Lion Emblem of Sarnath remain symbolisms and signages of India, with pride, despite the fact that he too was a ruler who waged a destructive war against the kingdom of Kalinga, killing thousands, before he embraced Buddhism and non-violence. And was played by Shah Rukh Khan in the film about his life.

So how are we okay with names like Ashoka and all versions of it, but Taimur, which is different, we want to bash?

If that was the ruckus a few years ago, then you can understand how this time, it would be magnified. You can imagine the frenzy that must’ve kickstarted when the news that Taimur’s baby brother would soon have to be named dawned on the folks of India. Twitter didn’t waste a minute dispatching jokes on what Saif Ali Khan and Kareena Kapoor Khan would name their second child.

In fact, one news channel’s Twitter handle, in a now deleted tweet, asked what the name would be this time—Aurangzeb or Tipu Sultan? When people tried to quote this tweet and point out that religion hatred aside, this was blatantly trolling a baby born merely hours ago, the counterarguments continued to level more hate towards Saifeena for choosing to name their first child after “a mass murderer of Hindus”.

What are you going to name your son #SaifAliKhan #KareenaKapoor?
Aurangzeb, Babur or Khilji? #TaimurAliKhan

I heard that the boy name will be Aurangzeb khan. Have I heard right?

I mean, sure, yeah, that was their intention. Of course, you Tweeple knew just what Saif and Kareena were thinking about. You’re their besties, so they must’ve told you all about their diabolical plans, right? Is there a special book of baby names that can instigate Twitter folks?

The entire spectacle reminds me of this show that I love, called Lucifer, on Netflix. The show’s premise is about the Devil, the actual Satan, whose name is Lucifer Morningstar, living on Earth as a swanky bar owner in Los Angeles. The unbelievable part is, he retains his biblical name and goes around introducing himself to people as Lucifer Morningstar. Of course, they find it bizarre and it takes some getting used to, but most people just take it in their stride, pretend like it’s just one of his roleplaying kinks or something, and move on. You don’t see Bible groups protest him, devout Christian politicians trying to file FIRs and petitions to get him to change his name from the Devil’s and anyone judging him too much for it.

Now I know, this is a TV show, and therefore fiction. But can you imagine one of our Indian TV shows pulling off a dark comedy with a man named Raavan? Or are we down with someone called Duryodhan, despite knowing that as per the Mahabharata, Duryodhan was a true friend and ultimately went to heaven even before the Pandavas got their entry card stamped? Indians strongly believe that their child’s name is often a reflection or a guiding light for their child’s personality and actions. That’s why most of our parents’ names are things like Mahesh and Ram and Sita and Gita and other divine deity names, because if there’s one thing we’re obsessed with in our country, it is our Gods.

And with time, as our Gods changed, the names changed too. Today we’ve got Alias and Ranbirs and Ranveers and Ananyas because we love Bollywood. And we’ve got Sachins and Azhars and Mahendras, Virats and Yuvrajs because we worship our cricketers too. And we don’t just obsess over them, but their kids also. So pretty soon, you’ll see Aaravs and Mishas and Saras because, well, if we name our kid after a star’s kid, they’l have that lucky life too, eh?

Nope, that is BS, and it doesn’t apply anymore. People with God’s names can be murderers, thieves, cheats, frauds and rapists too. So really, there is nothing in a name.

Also Read: Kareena Kapoor Khan Talks About Being Confident And Working Through Her Second Pregnancy

It’s horrible that people find the need to drag a family who has just been blessed with such happiness into something so toxic. What’s even more disheartening is that tomorrow, no matter what Saif and Kareena were to name this child, the trolling just wouldn’t stop. Egged on by news channels and tabloids that milk such news for every ridiculous and exploitative angle they can for TRPs, the judgements and trolling will continue.

You’d think celebrities are immune to this kind of dogged judgement about everything they do now. Kareena Kapoor Khan and Saif Ali Khan have clearly gone through this once with Taimur, so they’ll know just how to shut out the noise this time too. But the point isn’t just about how they will cope with this. The point is to call out how intolerant, and TBH, f**king stupid we’ve become that we are bothered by a newborn infant’s name.