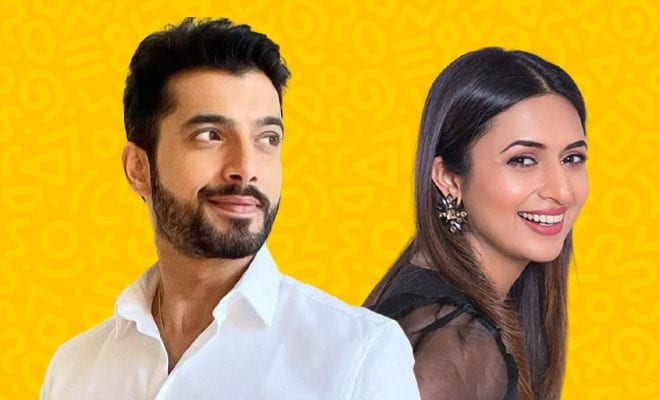 Divyanka Tripathi’s Ex, Sharad Malhotra Wants To Go On A Double Date With Her And Their Respective Spouses. That’s Gotta Be Awkward!

It was several thousand suns ago that Divyanka Tripathi and Sharad Malhotra were in a relationship. The duo starred together in Banoo Main Teri Dulhann. They were in a relationship for around eight years but things fell apart. Today, both of them are married to their respective partners. Divyanka Tripathi married her Yeh Hai Mohabbatein co-star Vivek Dahiya and Sharad Malhotra married Ripci Bhatia.

Recently, in an interview with radio host Siddharth Kannan, Sharad praised Divyanka saying that she is one of the finest television actors in India today. He went on to say how elegantly she conducts herself in public and that he is happy that she is in a good space in her life.

In fact, when the host asked him if he’d like to work with her again, he said he would. But what really intrigued me is that Sharad said he’d love to go on a double date with Divyanka and their respective partners. He added that it’s been several years since they broke up and they both are happily married. He wants bygones to be bygones. However, he added that he hasn’t spoken to her in six years but also said, “It’s good to have a nice dinner once in a while.”

I mean, yes, letting bygones be bygones is great when you’re the one who hurt the other person. Of course, a breakup hurts both persons. But it’s always the one who wanted the relationship to last who gets more hurt.

The reason, the duo broke up was Sharad Malhotra’s commitment phobia when it came to marriage. They were together for almost a decade but he got cold feet when Divyanka wanted to get married, he had said in an interview.

However, he did accept his mistake but he also knew it was too late. “I realise that now but unfortunately, it’s five years down the line. I should have realised it then, but no hard feelings,” he had said.

Divyanka Tripathi has been quite candid about her breakup with Sharad Malhotra. In an earlier interview she said she blames him for everything, sliding it subtly with a laugh. She added that she always made time for his family, was there for him all the time and sacrificed her sleep to keep him happy. She had also said he didn’t do the same for her.

In fact, she had expressed that women are such fools to do so much for the men they love, without thinking about themselves. “Now I ask myself, why did I do all that? The most important lesson I have learnt through this relationship is- don’t ever lose your identity in making others happy,” she had said.

ALSO READ: Divyanka Tripathi Talking About Fashion Policing Being A Sexist Concept Rings Very True And We Agree With Her

If Divyanka Tripathi still holds the same sentiment then the double date is highly unlikely to happen. It’s like a kidnapper asking you to stay in touch after you leave. Maybe they didn’t speak for six years because it’s better that way, depending on where they are in life. But as someone who has been hurt, if you really loved them and they made you feel like shit, you wouldn’t want to go on a double date with them.

ALSO READ: 7 Ways To Date Smartly And Avoid Fuckbois In 2021