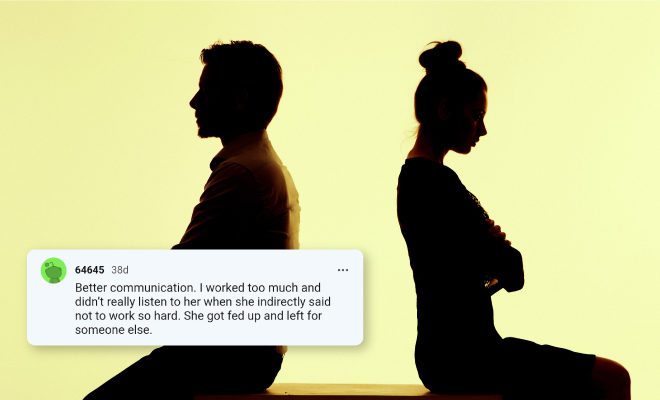 When a marriage ends, a lot of changes take place. Not just in the physical environment of the person but also in the environment inside of a person. Divorce usually is not easy for either of the spouses. And even though everyone’s reason for divorce is different, there is one thing that is common between them. And that thing is the fact that divorced people know, sooner or later, the one thing that could have saved their marriage. So, when a Reddit user asked divorced people to share what could have saved their marriage, redditors opened their hearts up and the replies were honest, heartbreaking, and delicate.

A Reddit user named u/itzFruity asked divorced people to honestly share the thing that could have saved their marriage and the replies just poured right in. The user got around 2k replies from divorced people all over the world sharing their thoughts. Most of them agreed that open, honest communication between them and their spouse could’ve helped. Some also believed that too much focus on their professional life and not enough on their personal drove their partner towards losing interest and seeking love elsewhere.

[Serious] Divorced people of Reddit, what could have saved your marriage? from AskReddit

Reading some of the replies from divorced people makes one realize that sometimes it is the right person at the wrong time and sometimes being kind and taking the effort can make a whole lot of difference.

Also Read: Men Who Were Formerly Toxic Reveal On Reddit What Made Them Change. It’s Insightful

Buzzfeed curated a list of some of the replies by divorced people that were eye-opening, honest, and truly heartbreaking:

Also Read: Reddit Thread Has Women Sharing The Times Men Called Out Other Men For Misogyny. And It Is Heartwarming!

The end of a marriage is not the end of the road. Just like these divorced people, others should take the time to reflect on what went wrong and what could have saved their marriage. In doing so, one can not just see the entire relationship ending in a new light but, one can learn so much more about themselves. And that will help them grow individually and stop them from making the same mistakes in the future, in another relationship, perhaps.

Signs That You Are Over Your Relationship, Way Before The Actual Breakup