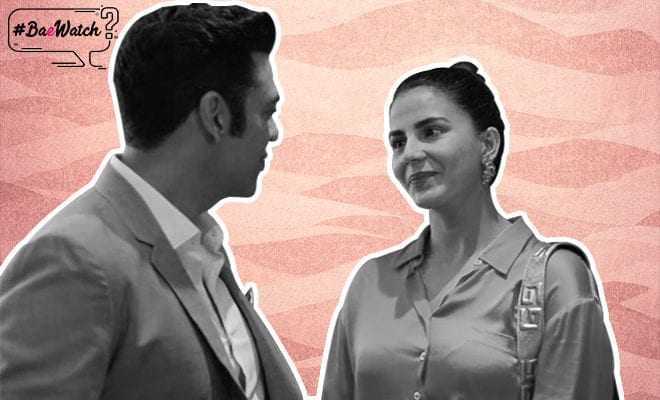 BaeWatch: “Is My Husband Having An Affair With His Colleague?”

When it comes to romantic relationships, I am a tad bit possessive. Like I have a Monica Geller streak in me, in the sense that I want to be his best friend, confidante, and companion. If he has a female friend who is closer to him than I am, I would not appreciate that. You know there are several people who treat their wives and girlfriends with the same kind of attention they treat other loved ones. A lot of men give their female friends the same kind of intimacy they give their girlfriends, the sexual stuff being the only subtraction.  I am not okay with that either. If sex is the only thing exclusive that you offer me, I don’t want it. For someone who is very secure, this can be unnecessary. But it is what it is for me and I hope my husband will be on the same page.

As long as it is not obsessive, different people have different boundaries and as a couple, you need to be on the same page. There’s no right or wrong. However, when one person feels like they are crossing over, the other person can feel anxious and jealous.

But how do you know if it’s just your anxiety or there is actually a cause of concern? So when a woman wrote to us talking about her husband’s alleged office affair, Team Hauterfly decided to help her out.

My husband and I met at work three years ago and got pretty close within no time. We’d go out for movies and drinks and before we knew it, we were falling for each other. It’s been a year since we got married and two since I changed jobs. However, I found out from a few sources that my husband has been especially close with a particular female colleague and the two would often go out for drinks together. I never knew that. He would always lie to me saying he was out with colleagues, as in a group. Not one single woman the entire office has been teasing him with. After that, I started paying more attention and realised that he has been acting really shady. What’s with taking his phone everywhere like a limb? In fact, I see her name pop up several times in the notifications. It seems like all he was looking for was an office romance and we got married for no good reason! What should I do?

Mansi Shah, Managing Editor: “You might be jumping the gun with your assumption that the wedding was entirely dispensable. I entirely doubt a guy would go through with the wedding and marriage if he was just looking for a fling with you. On the other hand, him hiding his phone and being sneaky about being out and about with this other girl does make it seem like not everything he is doing is above board. My suggestion, as is usually the case, is to have an open conversation about this. If he’s being sneaky about it, claiming nothing of the sort exists or is extremely dismissive about it, you’ve something to perhaps worry about. If he has good reason, say, like he’s planning to buy you a really fun present and wants a girl’s opinion on it, and he asked her, maybe she’s just a friend. Tread carefully but don’t jump the gun.”

Jinal Bhatt, Associate Editor: “Since yours was an office romance, I don’t need to tell you how workplace friendships can so easily transform into habits that become addictive. Work BFFs and Work Wives are legit relationships, and our society is still not as evolved to understand them, especially when they are between people of the opposite sex. Trust is paramount in a marriage but it comes from both parties contributing to making the other feel secure in their position. It’s only natural to feel what you’re feeling because you see the blueprints of your own relationship in what’s happening between him and his female colleague.

I’d suggest, instead of speculating, you should sit him down and tell him how this makes you feel. Assuring him that you trust him completely is okay. But being passive-aggressive and not letting him know the extent to which this bothers you is an absolute no-no. Maybe he has participant bias, and your opening up will be an eye-opener for him too? If he says it is only friendship, it’s okay to ask if you could occasionally hang out with them and get to know her. Often when we don’t know something or someone, we make all these scenarios in our heads. So this can help!”

“Let him know that dishonesty and lying are not appreciated”

Akanksha Narang, Features Head: “It is very natural for you to feel jealous and jump to a conclusion that your husband and his colleague are having an affair. You have been there, working with him. You believe he has a tendency to fall for a woman who he is seeing every day at work or interacting a lot. You remember how you both started talking, how you went out on dates, and how you grew close. And now, it worries you because you probably have an anxious attachment style.

They say there is no smoke without fire and often it is true. If your husband has been hiding their friendship and lying to you about hanging out with her alone, there is a possibility that he has a guilty conscience. It doesn’t necessarily mean he is having an affair with her. Maybe he is attracted to her and isn’t intending to have an affair. Yes, it doesn’t make it any better for you. Maybe they are just good friends and he is just keeping it on the down-low because he is afraid you’d get insecure. His intentions won’t be clear to you unless you have a word with him. Either way, let him know that dishonesty and lying are not appreciated and fruitful in a relationship, whatever his motives are. The next step, if you believe he isn’t cheating on you, would be having a discussion on what can help you feel more secure. He can start with being honest.”

ALSO READ: BaeWatch: “I Feel Jealous Of My Bf’s Female Friends Sometimes And I Don’t Know What To Do.”

Mitali Shah, Lifestyle Writer: “I understand your dilemma. I would be insanely jealous as well if I thought my husband was having an office romance. But here’s the thing, you need to trust your husband until he gives you a concrete reason not to. I know it’s easier said than done. But talk to him and voice your concerns. There is nothing wrong with him having a close friend who is a woman. But if there is something more going on, you have to ensure that he isn’t lying to you. Just because he takes his phone everywhere doesn’t make him necessarily sketchy. My advice would be to open a channel of communication and trust.”

ALSO READ: 5 Early Signs Your Boyfriend Is Cheating On You