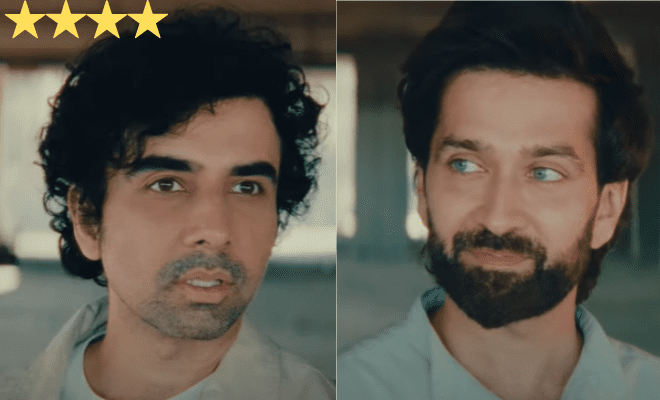 ‘Tasalli Se’ Review: Short Story About Two Friends Reuniting After Years Is Sweet, Will Make You Want To Hug Your Best Friend

A story solely focusing on friendship, mutual fondness and love between male friends is something that does not often come by in Bollywood. But when such a tale comes by, it is absolutely heartwarming, and Tassali Se is one such story. This short film stars Nakuul Mehta and Naveen Kasturia in the lead and is directed by Tarun Dudeja. It premiered on Amazon miniTV on May 17.

This short film tells the story of two estranged best friends, Somesh and Ranjan, who stopped talking to each other after their squabble turned into a full-blown argument over a political issue. This causes a huge rift between them. But 12 years later, Somesh gives Ranjan a call and asks him if he is up to meeting him because Somesh was in the city. They meet at a cafe but Somesh is the one who tries to keep the conversation going with small talk while Ranjan responds each time sarcastically. This causes Somesh to get angry at his behaviour and he leaves the cafe. Later, the two get together and while casually talking they reminisce about their college days and reflect on what and how things turned this bad between them when they could not live without telling each other the minutest details of their day.

Tasalli Se hits you right in the feels about true friendship. It touches on the topic of understanding your friend’s or friends’ perspectives to know where they are coming from. More importantly, it also emphasises how forgiving your friends and not letting ego ruin things between you.

Somesh and Ranjan represent normal friends. There is nothing unrelatable in their rapport. From their awkward first meeting after 12 years and walking on eggshells around them so as to not upset them to also making it appear that you are absolutely okay at the same time. How they take a trip down memory lane remembering their college days and the fun moments they had is also quite heartwarming.

Even though they haven’t spoken in 12 years, Somesh and Ranjan still know each other’s moods and thoughts like the back of their hands. If this isn’t the proper representation of true friendship, I don’t know what is. Not during any moment between Somesh and Ranjan did things feel forced or unnatural. Nakuul and Naveen enacted their parts so seamlessly that it felt they were actually meeting for the first time after 12 years of falling out.

This short film will make you remember that one friend you fell out with some time ago and neither of you have tried to get in touch with because both of you were hesitant and your ego did not let you do so. You will miss your current best friends very much and you will want to hug them right then or at least call them randomly to just apologise for all those times you guys fought.

Both Nakuul and Naveen have done a brilliant job at playing Somesh and Ranjan respectively. They have very beautifully added subtle nuances of being hesitant, being shy and unsure, being happy at finally seeing your best friend after 12 years in person yet being unable to show this. In the final moments of the short film when Somesh and Ranjan realise that they have not just missed their best friend but missed that human being who was their ‘person’, someone they could be vulnerable and scared and broken in front of, these moments are heart touching.

Also read: ‘Heartstopper’ Review: This Perfect Book Adaptation Of A Teen Love Story Made My Heart Go All Gooey And Warm

Tasalli Se feels all the more real and special because male friendships are not often focused on or even talked about. It is just considered to be a platonic relationship between two men but hardly ever someone talks about the depth of the bond that they share. A short film you have to watch!

9 K-Drama Men That Are Made Of Husband Material, We Want Them To Be Our Oppas!