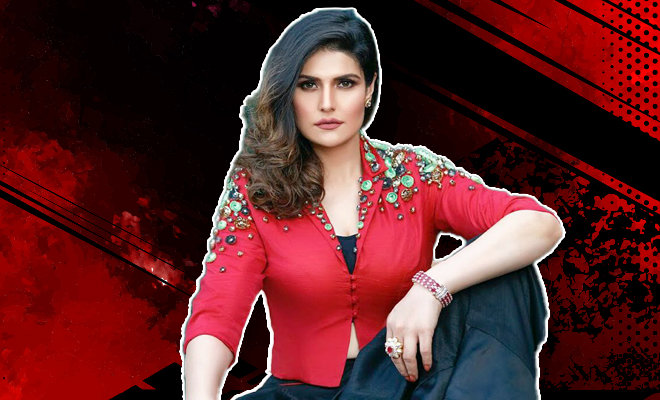 Zareen Khan Spoke About How She Had To Start Working After Her Father Left Them. We Have So Much Respect For Her Struggle

Ten years ago, Zareen Khan made her debut in Veer in which she starred alongside Salman Khan. Back then, we just saw her as a gorgeous woman who was Salman’s discovery. Some compared her with Katrina Kaif and some scrutinised her looks. When she made a debut, she was immediately put under so much pressure. From a commoner to working in a movie alongside an A-lister, being compared with one of the most beautiful actresses in Bollywood and criticised for your weight doesn’t make it easy for anyone.

But Zareen Khan is a tough nut and if you see her beyond her appearance and films, you’ll know. She recently revealed that her father had walked out on her family, including her mother, sister, and herself when she was quite young. “There was that one evening that changed our lives completely. My dad had walked out on us and left us. We didn’t have any money because we didn’t come from a space of inherited wealth. There was this one night when we went to a family function and suddenly my mother broke down completely,” she said to Hindustan Times.

In traditional Indian families where a man is the provider, it’s a huge financial hit when he leaves, especially when the kids are still studying. But Zareen Khan showed a lot of strength and became a pillar for her family. “I tried calming her (her mother) and explained that she doesn’t have to worry, I’ll take care of everything. Ab maine bol toh diya tha (I said it) but here I was, with over 100 kilos not knowing what I want to do,” Zareen revealed. She didn’t know how to make enough money, considering she didn’t have a professional qualification. And professions like modelling, acting and cabin-crew jobs require you to be of a certain fitness level.

As soon as she completed the 12th, she started supporting her family. “Then, I started a job at a call centre. My sister was still studying and I had just completed my 12th. I also wanted to get a job in an airline.” She further added, “I lost over 52 kilos weight and I almost removed an entire person off my body. But I’m happy that today, my mother feels we have sailed through it.”

Although your weight shouldn’t be an obstacle in your life goals, I am glad Zareen has come so far. She has sailed through those tough times and been a pillar of strength for her family. Quite a few months back, when she was body-shamed by some trolls on Instagram, they didn’t know what they were dealing with. She is a strong woman, who knows how to survive a storm.

The absence of a father or having one you can’t rely on is really tough to deal with in several ways. But I feel, women should really secure themselves financially. Have your own career and money. And if you’re a homemaker, you still need to have your own savings and access to your partner’s.

ALSO READ: Zareen Khan Gets Candid About Body Shaming And The Horrors Of The Casting Couch. We Are So Enraged

On the work front, Zareen Khan has three projects in the pipeline – a Punjabi movie, a Bollywood horror film, and a web debut. However, due to the lockdown, everything has come to a standstill.

ALSO READ: Neha Dhupia Is Such A Trooper. She Took Her Roadies Trolls Head On With Her Anniversary Post And We Think That’s Sassy