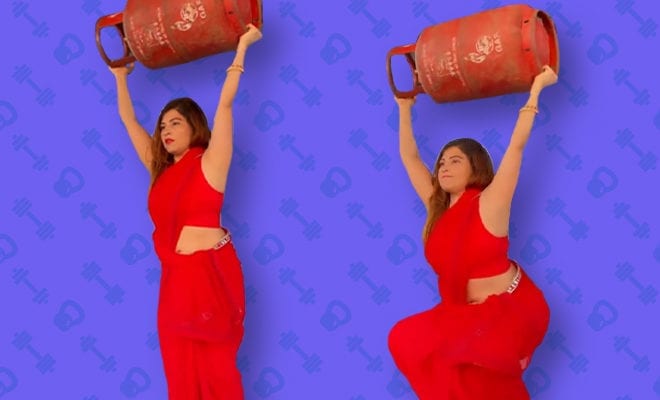 Woman Goes Viral After Picking Up A Cylinder And Doing Squats All The While Wearing A Saree!

It is an old saying, actually not a saying as much as it is a line picked up from a meme, that says ‘whatever a man can do, a woman can do in heels’. Pretty telling of the current narrative where a woman is no less than her male counterpart, sometimes better. But if there is one thing that we’d like to tweak in the statement, it is replace heels with a ‘saree’, because off late, women have proved that they can pull off almost anything in a traditionally draped saree.

A full split? Done. Headstand? done. Hula-hooping? Done. And the latest addition to that list has been that of a woman breaking all stereotypes and has us with our jaws on the floor, after she managed to pick up a 33kg gas cylinder and do squats, all in a saree!

A feat that would be troublesome for a lot of women and men to achieve, even without being draped in a saree, Shaili Chikara carried it out with a finesse and confidence that was almost contagious to watch.

Also Read : Odisha Woman’s Video Of Horse-Riding Wearing A Saree Goes Viral. This Is A Sight To Behold

Dressed in a beautiful red saree, with the pallu tucked in the front, fitness enthusiast Shaili Chikara, picked up the heavy cylinder, with such an ease and convenience, that it made us question our own fitness at this point. Captioning the video with a cheeky line where she wrote, “Meri video kahan kahan pahunchi“, Shaili posted that video on Instagram on June 3rd.

From then to now, her video has made several rounds on the internet, with users dropping in to laud her for her strength and the fact that she could do all of that in a saree and so effortlessly. Clearly there is nothing that can stop a woman from doing what she wants and is capable of, especially not what we wear – whether a skirt or a saree!

Also Read : Video Of A Woman Doing A Headstand And A Split In A Saree Goes Viral. Such A Star!