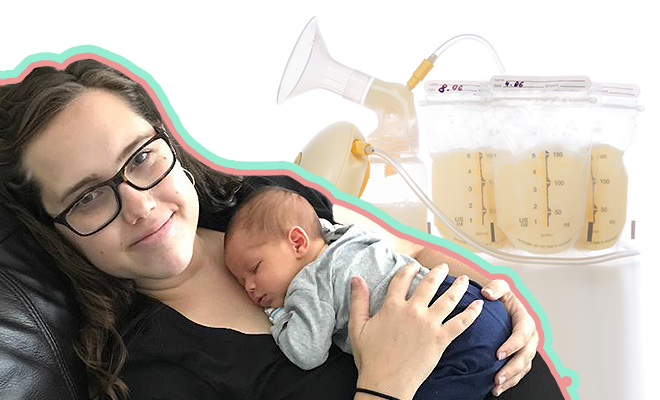 Woman Donates 62 Gallons Of Breastmilk All Through The Pandemic To Women Struggling With Breastfeeding. So Wholesome!

I’ve always wanted to have children someday. It’s not something I think about a lot but I know somewhere further down the road, I will. And as exciting as it will be, right now just the mere thought of being a hundred per cent responsible for another life is terrifying. Movies and TV shows paint this rosy picture of motherhood which makes it worse. It’s not all rainbows, unicorns and perfectly painted nurseries. In reality, there are complications waiting around every corner. The best you can do is overcome those complications in a way that helps you and everyone around you. Like this woman from the US who started donating her breastmilk to women struggling with breastfeeding, because she was overproducing. It’s wonderful how she’s helped so many people!

Over the course of this pandemic, Katy Bannerman, a North Carolina mother of two, began donating her extra-supply of breastmilk to mothers who were struggling with breastfeeding issues. She was inspired to donate her breastmilk after having struggled herself with lactation issues with her first child. Katy was devastated when she couldn’t nurse her child and hence, decided to help mothers who were going through similar situations.

When she became pregnant with her second child, Katy was determined to overcome her issues and breastfeed her baby. Katy visited a private lactation consultant and after that, she began overproducing. She was pumping up to 90 ounces of milk a day. Katy decided to help other struggling mothers and hence began donating all the extra milk. She told CNN, “That was kind of my intended recipient, someone who had themselves struggled with breastfeeding, for one reason or another.”

Over the course of the coronavirus pandemic, the North Carolina mother of two began donating her extra supply of breast milk to mothers struggling with breastfeeding issues.https://t.co/pw7K4ltkAd

At first, when she began overproduction, she didn’t know what to do with all the extra milk. So Katy turned to local Facebook communities where she found numerous mothers who were struggling with lactation and needed help. Katy posted about her abundance of breastmilk and received tons of replies from mothers who were interested. She said that being able to donate her extra-supply of milk made her so happy. What’s better than being able to help babies?

According to the CNN report, one of the families Katy helped had just adopted a baby and needed breastmilk. Another one had a baby that was extremely underweight and since Katy’s milk had a higher fat content, it helped that baby grow faster and better. Katy was not only able to successfully get over her own lactation issues but also helped out dozens of families on the way. She encourages women to avail of all the resources they can. She told CNN, “That’s another reason why donating was so important to me, is that women were able to still take care of themselves and take care of their babies without that guilt.”

Eventually, Katy stopped pumping extra breastmilk in October, donating her last batch in December. However, in the course of the pandemic, Katy has donated about 62 gallons of breastmilk to mothers who were struggling with lactation. This was so thoughtful of her.

We love everything about this!

A Pregnant Emma Roberts Spoke About Endometriosis, Fertility Issues And Freezing Her Eggs In Her 20s