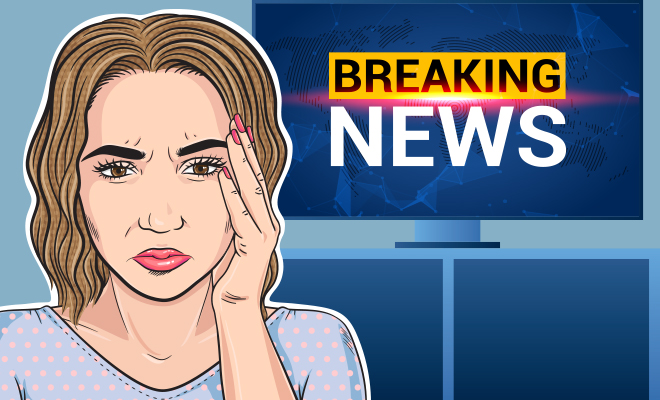 We Have Stopped Watching The News In My House. It Has Now Become Extremely Overwhelming

Whispers about a deadly virus reached our ear very early in the year. At that point, it was just deemed as an epidemic in China since it hadn’t spread to other countries yet. Most people didn’t even know what coronavirus was. Now, in just 5 short (actually, very long) months it’s all that people can talk about. Somehow, every single conversation I have just leads back to either the number of cases, the lockdown, the plight of the migrant workers or how some few countries have lifted their curfews. And if I am being honest, I am kind of sick of it. Look, don’t get me wrong I want to know all the facts and be well-informed, but those conversations are full of negativity and they just don’t lead anywhere, after a point.

However, there is so much uncertainty right now that expecting those conversations to go to places is unreasonable. Even then, it’s come to a point where, everywhere I turn, people are only talking about the coronavirus and it’s not all rainbows and unicorns. I was thinking about this the other day while my family having a full-blown discussion about the lockdown 4 over dinner. I thought to myself, the problem isn’t just the conversations, even watching the news now, has become too much to handle as well, considering we are facing a major crisis. After all, that’s where all these conversations stem from, isn’t it?

Have you noticed that no matter how many channels you flip, all there is sad, morose and negative reports with the same clip being played over and over again? Of course what else can we expect since there are such things happening that are in no one’s control? And, since it’s on an audio-visual medium, I feel like it hits harder than if it were print or digital.

During the first phase of this lockdown, my parents watched the news very often but I think they too have had enough of that pessimism. Now, my father watches the news for only 15 minutes every day and that’s it.

News Was A Must In The Earlier Phases

When the lockdown started, even I would watch reporters talk about all the morose events that are happening around the world. I used to think it’s our responsibility to be up to date about the global events, considering at that point we had no idea how bad it was going to get.

Then one day in the second phase I think, I saw this piece about people pelting stones at doctors and nurses in Indore. I was so disgusted that I switched off the TV. But the next day there was a story that was even sadder. After that, I started realising that nothing good is coming out of watching these reports since all it seems to be doing leaving us helpless and hopeless about things we have no control over.

Now I consciously try and avoid watching the news but obviously, there are times where I just can’t help myself.

Also Read: #LastNormalPhoto Is A Hashtag Where People Are Putting Up Their Picture From Just Before The Lockdown And It’s Making Us All Nostalgic

It Has Become Overwhelming

A few days ago, I gave in and started watching this report about migrant workers and how despite all the donations, so many of them are still going hungry. We all know they are walking thousands of kilometres just to get home. But this one was about how a couple was walking with their two children and they had no milk or food or even footwear to give their children. It was extremely hard-hitting, to say the least.

You have to agree, watching the news or even reading about current affairs has become an overwhelming task. The atmosphere in the world is so horrid right now that it feels like the lesser I know, the better I feel. So many of my friends and relatives have told me this exact same thing.

Also Read: Netizens Share Lockdown 4.0 Memes That Are Both Hilarious And Relatable

No More News In My House

Apart from the occasional check-in, everyone at home has just stopped watching the news. I am not being nasty, but wouldn’t you agree that all it does is puts you down further? I think now people are okay with being (very) slightly ignorant rather than feel horrible about things that are beyond their control and I completely agree with that.

Staying away from the constant updates has done us a lot of good. The atmosphere at home is considerably lighter and happier because we choose to not obsess over this virus anymore and not watching the news is a major part of that.

You know it’s very funny that I am trying my best to not focus on the news when my whole job revolves around knowing what’s happening around the world. There has been a surge of bad news in the past few months and all that negativity can’t be good for anyone.

I know this isn’t a permanent solution but if you think about it, the coronavirus isn’t permanent either (well, a girl can hope, can’t she?).

This Lockdown Has Helped Me Reconnect With My Elder Brother. A Broken Relationship Has Been Mended

GET HAUTERFLY IN YOUR INBOX!
Related ItemsFeaturedcoronaviruslockdown#Lockdown4watching the newsNews corona