Video Of A Chinese Man Beating His Wife To Death On A Street In Broad Daylight Goes Viral. People Just Stood And Watched As The Woman Was Killed. 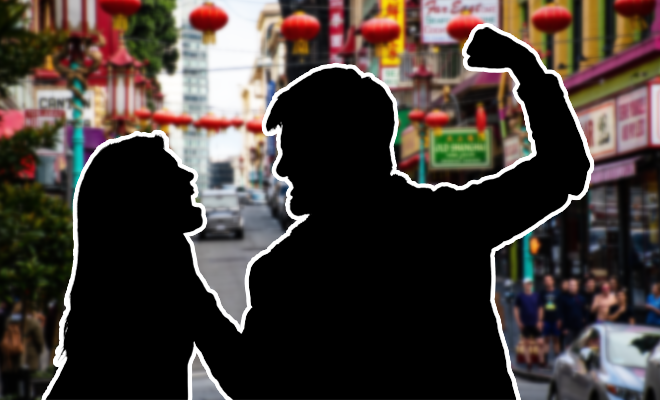 Last year, back in June when the movie Kabir Singh released, it was followed by a lot of criticism, for it opened a larger dialogue and window to address toxicity in relationships. Portraying a rather skewed relationship between the lead characters,  the movie reflected misogyny and entitlement, and glorified abuse. A problem that goes way deeper, it’s almost like a rot in society. We are talking about this today because a Chinese man beat his wife to death in broad daylight and no one even blinked!

No better than our own country or any other, China too currently struggles with the rise in number of domestic violence cases, so much so that almost 50,000 complaints about domestic abuse are lodged every year. But this time, one incident that has caused an issued an online outrage across the country is one which is extremely shocking.

The thing about domestic violence is that most of the time, it happens in private, behind closed doors and between a husband and wife, often making it difficult for anyone else to intervene or for a third person to even find out. But what happens when such abuse doesn’t take place behind closed doors, rather in front of bystanders during the day? Hint – absolutely nothing.

Shanxi, yesterday – at least 4 people stand around as this man beats his wife. Nobody steps in to stop this 'marital conflict.' This is how it starts, but it ends up with the woman being stabbed & killed by her husband.

Many people looked on and filmed, yet nobody stopped him. pic.twitter.com/mzYRfJ6e2l

Also Read : This Woman Jumped Off Her Balcony To Escape Abuse And Still Couldn’t Get A Divorce. Why Do We Hate Women?

That is right. In the video that is now making rounds on social media, the Chinese man can be seen beating his wife to death while there are people milling around as if this is of no concern to them.

Reports share that the Chinese man started beating his wife after the couple accidentally collided with another vehicle while driving an electric scooter in the city of Shuozhou. The video further showed that there were at least four onlookers who stood by and watched the horror unfold, as the man dragged the woman to the ground and struck her repeatedly with a chair until she lay on the pavement in a pool of her own blood.

A police spokesperson shared, “The suspect is in the custody of public security organs, and the case is being fully investigated.” Meanwhile people are irate about the man and the people who didn’t step forward to help the woman. One user also wrote, “Shanxi, yesterday – at least 4 people stand around as this man beats his wife. Nobody steps in to stop this ‘marital conflict.’ This is how it starts, but it ends up with the woman being stabbed & killed by her husband.  Many people looked on and filmed, yet nobody stopped him.” Another user wrote, “He’s not holding a machine gun, why did no one step forward to control him?”

And that perhaps is the sad reality, where people would rather stand and make a video of a woman being murdered on the street, only to upload it later and curse the man for his actions, but not care enough to intervene and actually make a difference.

Even though the Chinese government introduced a law in 2015 to criminalise domestic abuse, the loopholes in the system often make it harder for the woman to get out of the marriage legally, thereby subjecting her to a longer period of abuse. Even after the landmark Domestic Violence Law Act came into existence in 2016, reports suggest that the facilities opened up to help victims that ran away from their homes are gravely inadequate and ineffective in curbing the numbers.

Also Read : Nandita Das’ Short Film ‘Listen To Her’ Shows That Domestic Violence Victims Need To Feel Heard For Them To Speak Up