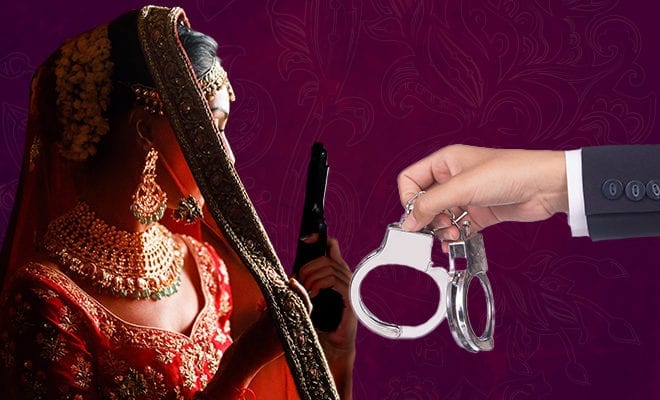 UP Bride’s Video Of Air Firing While Making An Entry Goes Viral. A Case Gets Lodged Against Her

I understand, people love making a thug-life kinda entry to their wedding. You know, doing something that shows off their swag, or being rangbaaz, as they call it in Bareilly Ki Barfi. Why else would the entire wedding party be wearing sunglasses inside the banquet hall where there is no sun? Style, they call it. But recently, a UP bride Rupa Pandey, took it a bit far, marking her entry by firing in the air using a pistol.

Now, I applaud that she was being like, ‘Why should boys have all the fun?’ and trying to make an entry that is otherwise more commonly limited to the grooms. But casually handling a gun in a crowded place, unsupervised? You’re playing with fire, woman! It’s not cool for men to do; it’s not cool for women to do it!

In the video that has gone viral, the uncle Ramniwas Pandey who owns the gun is seen handing it to her just before she steps on the stage. And there she goes, in full swag, indulges in celebratory firing, as people cheer.

She is escorted by the groom on the stage as she is done with firing. Now, I love the power dynamic but hey, maybe do something that isn’t so dangerous and well, illegal? No?

As the video went viral, the police lodged an FIR against the bride and her uncle, under relevant sections of the Indian Penal Code, and the Arms act. In fact, overshadowed by the firing is the fact that they overstepped the guest limit allowed during the pandemic. According to the UP government’s rules, the number of guests at your wedding shouldn’t exceed 25. However, their wedding apparently had a lot more and a case has been registered under the Epidemic act. Meanwhile, the police revealed they are cancelling the license of the gun used in the celebratory firing.

ALSO READ: This Chennai Couple Had Their Wedding Ceremony Underwater In Their Traditional Outfits. We Love Their Adventurous Spirit.

As much as we seek fun and want to make an entry in rangbaaz style, it’s better to keep it within the boundaries of safety and security. Because right now it seems like the bride aimed the gun right at her uncle’s chances of owning a license and her having an uneventful wedding. Use a fake gun, but that will look more clownish. How about not shooting at anything? Whatever happened to the good old bridal entry dance?

ALSO READ: 2.5 Feet Tall Azeem Mansuri Gets Engaged After He Requests The Police To Help Him Find A Match