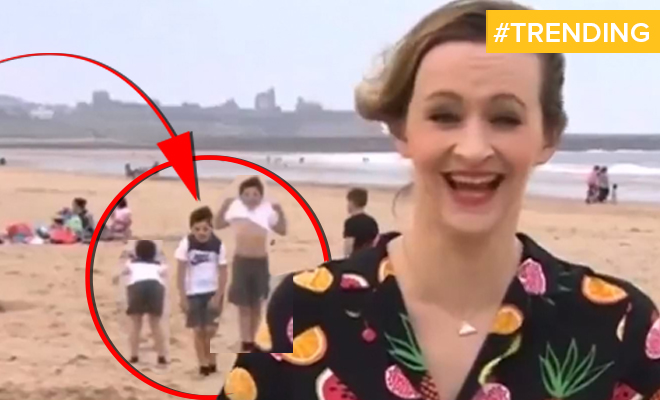 #Trending: This Little Boy Video Bombed A Weather Report With His Hilarious Dance Moves. This Is The Best Thing You Will See All Day

Here’s the thing, we just have to accept that the year 2020 has gone down the drain. The good news is that we just have to suffer for 4 more months and hope and pray that 2021 is a notch above this. The worst part about this whole year is not the pandemic or any of the other horrible, unforeseen things that have happened but the negative and sour taste they have left in our mouths. I mean, this year has succeeded in even sucking all the fun out of social media.

If you have opened social media lately, then you know what I mean. Ugly feuds, brutal incessant trolling and unnecessary spread of hatred have outweighed the positive parts. Of course, we still have our moments of fun with memes and hilarious trends but overall social media has become a war zone and we are spectators waiting for the next bloodbath. Damn, that’s a good metaphor *self five*.

At a time like this, I understand just how much we all need a good laugh. Something that turns the frown upside down. And there is nothing that accomplishes that better than a genuinely funny video. So, we bring to you from the depths of Twitter, one of the funniest video-bombs ever.

This video is like the sequel to the BBC interview where the interviewee’s children decided to make a hilarious cameo and then his wife grabs both children and like a ninja and shoves them out of the room. If you thought that was funny, you are going to love this one.

Recently, a BBC reporter, Jen Bartram was video bombed by a child while she was doing a weather report on a beach. He has been deemed as the real star of the show after he put on a little performance behind Jen as she talks about strong winds on the beach. This incident happened in South Sheilds, England and the video has achieved virality after Jen herself took it in her stride and reposted this. She also added music that goes perfectly with the little boy’s dance.

Here he is. Never mind me: the real star or the weather forecast was the dancing kid! 💃🏻 💃🏻 💃🏻 🤣 pic.twitter.com/4YfpRmrJ3L

The mischievous kid, who has been identified as Leo, can be seen lifting his T-shirt, shaking and spanking his bum and even attempting to twerk just a few feet behind Jen. I watched the video on repeat, it’s just so funny.

Jen initially posted a tweet saying, “I was unaware of being upstaged by the young boy with some rather enviable dance moves during my forecast”.

Then sharing the video on Twitter she said, “Here he is. Never mind me: the real star or the weather forecast was the dancing kid! 💃🏻 💃🏻 💃🏻”

I’ve given this forecast what it deserved. Sound on. pic.twitter.com/3hBCJLvjQo

After that, it seems like Jen wanted to have some fun of her own. The second time she shared the video, she had muted herself added a soundtrack that goes perfectly with the boy’s dance moves. She captioned the tweet, “I’ve given this forecast what it deserved. Sound on.”

I think this video is the best thing I have seen on social media for a while. It’s super amusing, innocent fun and let’s face it, this kid did what thousands of kids only dream of doing. The kid has some seriously kickass moves!

Also Read: This Little Girl Crashed Her Mother’s Interview On Live TV With Pressing Matters Related To Her Unicorn. It’s The Most Adorable Thing You’ll See!

Check out some of the reactions netizens had:

This is pure genius. This would cheer up anyone.. Hilarious love the boy to get known. 😂🤣 And fair play @JenBartram for adding a worthwhile soundtrack. https://t.co/1Mx6kJdzTb

The kids got some moves on him!

Children make everything better and more enjoyable, even a simple weather report.

#Trending: Popular Youtuber Uncle Roger Posts A Video Reviewing A Recipe For Egg Fried Rice And It’s All The Entertainment You Need