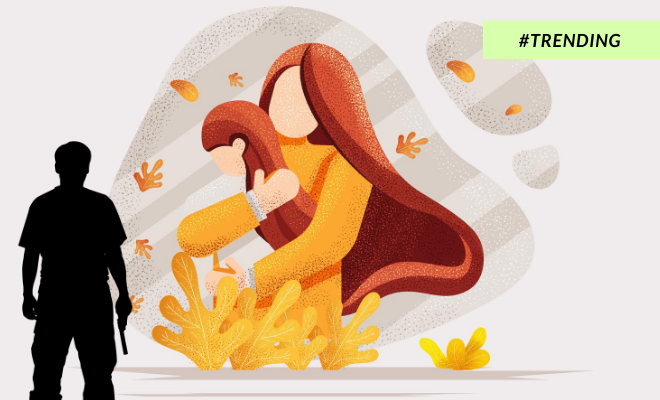 #Trending : A Mother Fought Off Two Kidnappers To Save Her Daughter From Getting Kidnapped. She’s So Brave

On the days that I am coasting along on the daydreaming train, which is pretty often right now, I wonder what kind of mother I will be to my children. I often end up pitying and loving my imaginary kids at the same time. Pity because there would probably be no one to save them from my deadline-delivering strictness. And loving them because they would be the most precious ones in the world for me, that I would do absolutely anything for.  Call it a mother’s instinct or anything else, but perhaps every woman who has a child, would relate to what I feel and would walk the ends of the world to keep her kid safe from harm’s way.

As we literally saw one woman doing, when she tackled two men who tried to abduct her little daughter in an incident on Tuesday. This happened in Delhi and the chilling incident was caught on camera where the mother can be seen grabbing her daughter from the kidnapper’s bike with in a frenzy, all the while pushing the two men on the bike causing them to tumble and fall down.

According to the police reports, the two drove up to the four-year-old girl’s house at around 4 PM on Tuesday, on a black Pulsar to carry out the kidnapping. Ringing the bell, one of them, dressed in a blue shirt and carrying a red backpack, asked the girl’s mother for some water and, while she was distracted, grabbed the girl and tried to escape.

Also Read : #Trending : Police Officials In Chennai Convinced The Employers Of A Woman Recovered From Covid-19 To Give Her Her Job Back. We Think This Is Great

The 30 second CCTV footage shows how one of the two kidnappers grabs the girl from the house, whose screams can be heard on the video, to carry her over to the bike, and just as the men were about to leave with the daughter, the mother comes rushing to push them over and grab her girl back. The entire episode, as though right out of a movie, was as frightening to see as it was brave.

There is another video retrieved from the CCTV cameras that shows the two men trying to escape after their mission failed, as the neighbours tried their best to hold them down, blocking them with their scooter and charging over but could only confiscate their bike. Upon further investigation of the bike and the backpack that was left behind, the police were able to track its owner, Dheeraj, a resident of Jagat Puri who confessed how the child’s own uncle, Upendra was the one behind the entire attack.

The girl’s father is a successful cloth merchant, and her own uncle orchestrated the abduction, so he could later blackmail the family for a ransom worth 35 lakhs rupees. Meanwhile Dheeraj, also confessed how he was promised 1 lakh rupees in exchange for agreeing to get this done. The police also found 4 cartridges and a country-made gun in the backpack.

To think that family would do this to their own people, for a sum of money is just proof that humanity has yet again hit another low. But kudos to the mother and her fierce instincts to save her daughter, she proved to be the real hero here!

Also Read : #Trending : A Mother Walked Up To A Woman On The Beach, Suggests She Cover Up Because Her Sons Were Staring. So, We Refuse To Teach Our Sons Better?