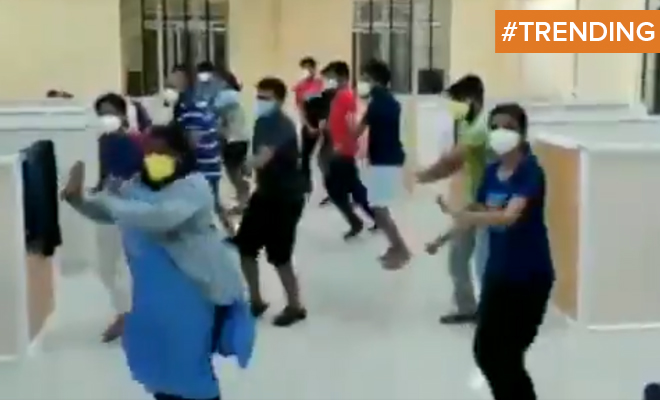 #Trending : A Group Of Healthcare Workers In Karnataka Danced In A Flash Mob To Cheer Up Covid-19 Patients. Gotta Love Their Enthusiasm!

Going through this year of a pandemic has been much like living life at the sea. Sometimes unusually calm and quiet, and at other times, finding ourselves in the middle of a storm, not knowing when it would settle down. Grief, impatience, fear and stress have all been hitting us in waves as we still struggle to find our footing. And while just like at the sea, things still largely remain unknown, it is now more than ever that we need to gather every  ounce of courage, hope and positivity to get through the remaining time in this abyss. And hoping to help us do just that, were the health workers in an institute in Karnataka.

Recognising the need to spread a little bit of happiness and a lot more joy, especially to the ones who are at the hospital, fighting  against Covid-19, were the healthcare workers from the Vijaynagar Institute of Medical Sciences in Karnataka. The workers who came together to bring a smile on the patient’s faces performed a surprise flash mob to keep their morale up.

A video that is now making rounds on Twitter shows how a group of healthcare workers including doctors, nurses and attendants, coming together to shake a leg to a song, cheering up the ones admitted in the hospital, and breaking them out of the monotonous and stressful rut they’ve been living in.

Also Read : This Video Features Eight Women Who Are Doctors And Dancers. We Love Everything About It

#WATCH Karnataka: Asymptomatic #COVID19 positive patients organise a flash mob at a COVID care centre in Bellary where they are admitted. (19.07.2020) pic.twitter.com/30D6E4ESOV

Shared on twitter, the video shows workers dancing to the song Mastu Mastu Hudugi Bandalu from the 1999 Kannada film Upendra, accompanied by a few asymptomatic Covid-19 patients also, who were an active and happy part of the flash mob.

Keeping in mind the precautions, the group can be seen sporting masks, dressed in all white and dancing together in a sync that is sure to make you smile. And at an hour, when we can’t help but wonder what the future holds for us, it is heartening to live in the moment, and even more so when others are trying to lighten up the mood for you to drive your worries away.

The video currently has amassed over 99 thousand views and is sitting at almost 5 thousand and plus likes that are only increasing by the second, with every click, that shows how even the simplest of gestures can bring your spirits up all the way. Guess, we can all learn to appreciate the simple things in life, and be grateful for those who try to remind us of the same,

Also Read : The Video Of A Doctor Dancing To The Song Garmi In Her PPE Kit Is The Best Way To Kick Negativity To The Curb