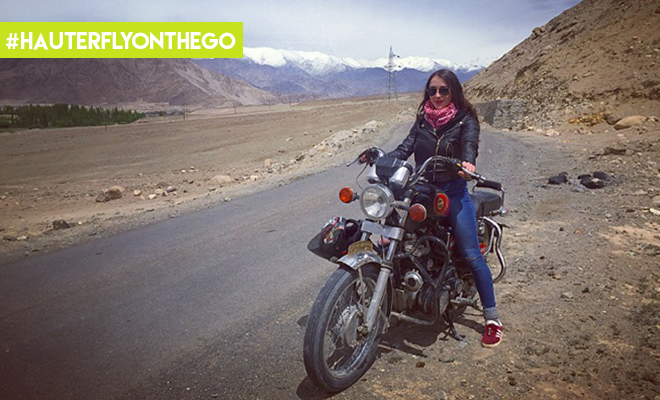 A French-Syrian Girl’s Solo Journey In The Himalayas

My name is Laetitia Ayache, I am French-Syrian and I have been living in India for around 10 years now. I started my journey here with an international exchange program between my university SciencesPo Paris & Jawaharlal Nehru University, New Delhi.

My first impression of India could be translated in one word — shock! In 2007, New Delhi was rather different from the capital city we know today. Poverty, dirt, and chaos at every step of the way.

It was the first time I was ever away from my family, living on my own in a complete foreign country, with a foreign culture and even language. Like many French people (and Syrians), my English was pretty poor. I used to commute by public transport — from the local buses of Delhi to the sleeper-class trains across India, from where I discovered the rich beauty and diversity of the country.

I highly recommend backpacking across India — it changes you as a person. I always say that I grew up twice — once in France and Syria during my childhood till my teenage years; and one more time in India, where I became adult and the woman I am today.

India was never a conscious choice I made, it was my destiny. I was 19 years old when I first came here, and since then, India has accompanied me in every aspect of my life.

In 2012, I left my comfortable and spacious Delhi life to move to Mumbai for professional reasons. After spending around 4 years at the L’Oréal India Group (Luxe division), I joined Chalhoub and then Christian Dior as Brand Manager for the Indian market.

Life could have changed drastically from my time at JNU…but it did not. I have always made sure I maintained a balance between the vibrant and Westernised urban life of Mumbai and my attraction to the true authenticity of the Indian culture.

I have travelled alone in India and abroad multiple times — France, Lebanon, Egypt, China, USA, etc. But it may surprise you when I say India is one of the safest places I have visited, even while travelling alone as a ‘white girl’ (yes, let’s just state it).

I think Indians are the most honest people I have ever come across — I have often randomly left my bags and belongings in various modes of public transport or have travelled by road through the day and night without feeling one ounce of fear.

My last trip was in the oh-so-gorgeous Ladakh, just one week ago. My very first trip to Jammu & Kashmir was in 2007, at a time when my own embassy used to forbid foreigners like me to travel there. But bans or political instability doesn’t worry me.

After experiencing all four seasons in Kashmir, I felt like I needed to see Ladakh and the Himalayas more deeply, in their greatest heights. I generally hate visiting a country with other tourists or through a travel agent…I think every place you see in the world needs to be experienced along with the locals — it’s the only way to experience the authentic culture of a place and avoid the touristy and commercial clichés. My Ladakhi friend, Hashim, helped me organise my trip from Leh.

I took the road with only my Ladakhi driver, Nasir, and drove through Ladakh for more than 17 hours on the Himalayan roads, split over 3 days. Driving for days on those tricky roads, alone with a perfect stranger and with no network, may sound a little risky for many girls. But not once did I feel scared or threatened.

Ladakhi people are extremely calm, caring, and kind; they are not money-minded and they won’t try to fleece you if you are a single girl or a foreigner.

On the day I arrived, I travelled to the popular and very high altitude pass, Khardungla. The entire place was still covered with heavy winter snow and offered such a magical view. We then continued to the valley of Nubra, which is blessed with a unique and rich palette of natural beauties! You truly feel closer to God when you see this kind of nature.

As humans, our value seems so insignificant next to this. There is probably no better break from my stressful and hectic professional life in Mumbai than to get lost on the Himalayan roads. This kind of landscape is capable of bringing tears to your eyes, can instantly calm you down.

For centuries, philosophers from various generations and cultures have mentioned that the secret of happiness lies in this search of balance — the balance of your mind, body, heart, and soul. I believe that in a place like Ladakh, and generally in the peace of the mountains and in nature, you can definitely achieve this balance.

During my journey to the Pakistani border, I stopped for the first night in Diskit, which is in the desert of the Himalayas. Only 3 hours by roads can take you from the heavy snow of Khardungla to the dunes of sand of Nubra. You’ll find so many caravans of double-humped camels; the landscapes are breathtaking with waterfalls and rocks.

I spent my first night camping under a sky full of stars. With the level of pollution nowadays, there are few places you can spot the milky way and shooting stars. I was staying alone in a tent, obviously without any kind of locker, and in the middle of nowhere, with no method of communication, no mobile network, or WiFi…but I slept like a baby! The Ladakhi, Kashmiri, and other Indian male staff were caring, respectful, and warm.

The next morning, I continued my roadtrip to the Pakistani border, the land formerly known as Baltistan. Here you’ll find a gorgeous valley of rocks, waterfalls, and rich plantations. During those 5 hours of road travel, you’ll pass by small villages, smiling faces, and multiple army camps and checkposts…the contrast is mindboggling.

Considering this land was taken over by India in 1971, it’s still a very strategic and well-controlled area. You’ll spot both the Indian army and Pakistani troops on their respective sides of the border. Yet the land inspires peace and harmony.

My final destination was this gem of a village called Turtuk. Its people, the Baltis, speak their traditional dialect as well as Urdu. It was a perfect time for me to practice my Hindi and Urdu, as no English is allowed! Turtuk is a Muslim village of Tibetan decent. Its people follow Sufism.

The place is steeped in the history of the silk route, and people are diverse and stunning. Here, too, there are no modes of communication besides a few landline phones. I spotted all of one television set and the refrigerators made of rocks.

Although the life here is basic and may seem like its cut off from the civilisation and the modernisation, the people inspire happiness at its best. You would have to walk around the tiny streets of the village to discover its cultural legacy — from an old Buddhist Gonpa on the top to a 16th century mosque with pretty unique architecture.

You can chit-chat and laugh with the children running around the streets through the day. Where there is less technology and so-called ‘progress’, there seems to be a greater degree of humanity. Have we lost all this to our urban lifestyle?

In Turtuk, I stayed in a humble guesthouse — it’s a typically traditional Balti house with a few rooms for travellers. Mine was called the Maha guesthouse, managed by the very kind Suleiman. To be honest, I was the only woman around and truly the only foreigner! Surrounded by dozens of men, I could have felt in danger…but again, I was at complete peace, chatting with each of them, who treated me with absolute respect and kindness.

A Kashmiri cook, Abdul Hamid from Srinagar, was in Turtuk for a few days and made us a full feast for dinner. The next day I woke up with the sun. With Nasir, we took the road back to Leh. I knew at the time that Turtuk had my heart and that one day, I would certainly come back to this land of apricots and smiling children.

After a long trip of 7 hours, we reached the pretty town of Leh. I got the chance to meet more locals, discussing religion, politics, history, and much more. In Leh, I stayed at the Grand Himalaya. I would recommend this hotel for its comfort, authentic charm, and amazing service.

Here, I got the chance to meet Tenzin, who shared, besides his incredible life story, the work of the internationally known European photographer, Olivier Follmi. In 1988, Olivier and his wife came to Ladakh for the first time and explored the semi-frozen land of Zanskar. They met a couple of Zanskari peasants and their 2 children.

The couple asked the photographer if he could take his children back to Leh, where the closest school was. Olivier accepted and reached Leh after a 14-day walk in the Himalayas. Since that time, Tenzin, one of the 2 children, has considered Olivier as his spiritual father.

The portrait of Tenzin, taken by Olivier, is known across the globe (image above). I think meeting him and hearing his story will be one of the most striking memories of my journey in Ladakh…did I even mention his French was on point?

This is perhaps the best part of travelling alone — unexpected meetings and unusual experiences. You take yourself out of your comfort zone and push yourself to make memories with new souls. Each of them has a unique story to tell. It’s only the ope-minded who can really listen to their stories.