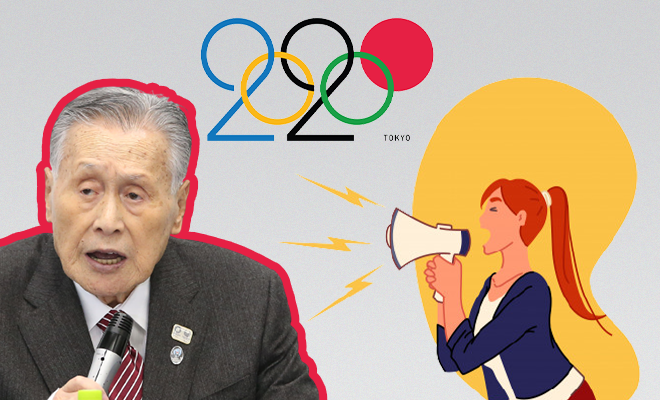 Tokyo Olympic Committee Head Says Women Talk Too Much During Meetings And Should Have Their Speaking Time Regulated. Erm, Stereotypical Much?

Earlier, when I didn’t know any better, every time a politician or a man in any authority position would pass derogatory comments about women, my blood would boil. Now I have come to accept the fact that the words ‘politician’ and ‘misogynist’ are, well, synonymous. It’s extremely frustrating. But alas, all we can do is spread enough awareness to make this kind of behaviour unacceptable. Having said that, the latest politician to come under the scanner is Yoshiro Mori. He is the president of the Tokyo Olympic organizing committee and a former Japanese prime minister. He claims that in online meetings, women tend to talk too much. Ugh. How thick-headed, ignorant and stereotypical can someone be?

You see, in an online meeting of the Japanese Olympic Committee board of directors earlier in the week, Mori was reported by the daily newspaper Asahi Shimbun saying women tend to talk too much during meetings. His sexist comments have created a storm in Japan.

The newspaper, Asahi reported him saying, “Women are very competitive. When one of them raises her hand, they probably think they have to say something, too. And then everyone says something.” This statement came after Mori was asked why there are so few women on the Japanese Olympic Committee. His reply is problematic and stereotypical in every sense of the word.

Yoshiro Mori, the Tokyo Olympics committee president and a former Japanese prime minister, prompted outrage after he said women talked too much in meetings and should have their speaking time regulated.https://t.co/AhCIgPJgpj

Also Read: Japanese Swimmer Gets Suspended After A Video Of Him Taking His Girlfriend To A ‘Love Hotel’ Surfaces. What Are Love Hotels?

Mori didn’t stop there. He went on to say, “If we increase the number of female board members, we have to make sure their speaking time is restricted somewhat, they have difficulty finishing, which is annoying. We have about seven women at the organising committee but everyone understands their place.”

What does he mean by “understands their place”? This man, the head of the Olympic Committee, thinks that women talk too much, have difficulty finishing their statements and hence are “annoying”. I’m sorry, I didn’t realise we lived in the 1950s. Yoshiro Mori’s mentality sure does. It’s no wonder that in Japan, women are grossly underrepresented in board rooms and in politics. Yoshiro Mori’s statements are antagonizing and extremely shameful. People in Japan are calling for him to resign. Which, obviously, he doesn’t think he should do. Because why should a man take responsibility for his sexism, right?

After the storm that his comments stirred, Yoshiro Mori half-heartedly apologized. But he made it very clear that he will not be stepping down. He said, “The statement made at the Japan Olympic Committee was an inappropriate expression, contrary to the spirit of the Olympics and Paralympics.” Further adding, “I am deeply remorseful. I would like to withdraw the statement. I would like to apologize for any unpleasant feelings.”

On the other hand, Yoshiro Mori was also reported to say, “I am not thinking to resign. I have been working hard and helped devotedly for seven years. I will not be stepping down.”

The fact that he thinks he shouldn’t resign, despite his extremely derogatory remarks, is disgusting. His apology was weak and forced. If he really didn’t mean any disrespect towards women, he wouldn’t have said the utter rubbish that he did in the first place. The worst part is that it took an entire social media storm for Mori to see just how sexist and stereotypical his comments were.

No one is expecting politicians to be hardcore feminists. But the least they can do is not pass derogatory and disrespectful comments. It’s not that difficult to just be civil, is it?

The Japanese Government Is Offering Couples Rs 4.2 Lakhs To Encourage Them To Get Married Early. BRB, Moving To Japan