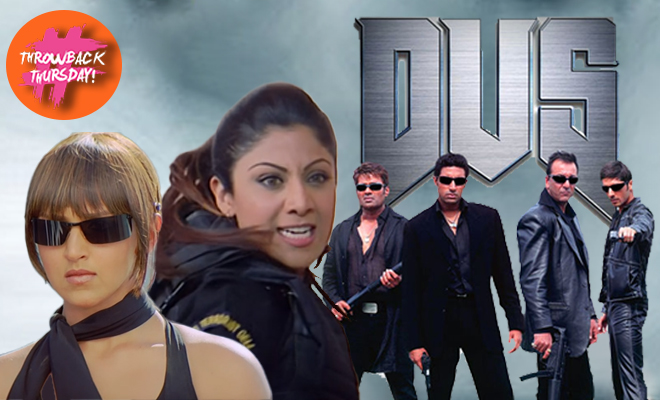 Throwback Thursday: Dus Is Flawed But Refreshing For Normalising Female Action Heroes. It Deserves A Sequel

Yesterday, we woke up to Shilpa Shetty’s and Sanjay Dutt’s posts remembering the good old days when they shot Dus. An action-thriller, Dus released back in 2005 and also starred Suniel Shetty (Dan), Abhishek Bachchan (Shashank), Zayed Khan (Aditya), Pankaj Kapoor (Himmat Singh and later revealed to be Jambwal), Esha Deol (fake agent Neha) and Dia Mirza (Anu). So this got me all nostalgic because it was part of my growing up years. Whenever the song Dus Bahaane would come on TV, my sisters and I used to have a little dance, following the same steps to perfection. That’s why I loved songs of that era – they came with proper, easy-to-do dance steps that we remember even today. And honestly, I have seen people enjoy much more on these songs in the club; it’s fun to watch everyone on the dance floor do the hook step together.

Also, I really like Abhishek Bachchan. I feel he is underrated and I am kinda looking forward to his Breathe Into The Shadows because that might do some justice to him. In fact, I loved him in Manmarziyaan too. Dus completing 15 years is like how Deepika Padukone puts it – opening a box of sweets and not being able to stop at one bite. So I went on to watch the film and let me tell you, even though the making of it isn’t like James Bond movies, it’s still good and simple. The plot twists are cool and some things now seem like too easy for our IQ but back then I guess all of us weren’t inhaling content on OTT platforms and needed things to be simplified.

Dus revolves around Anti Terrorism Cell of India’s attempt at figuring what Jambwal, a wanted terrorist has planned and then failing in his plan! Now Siddhant (Sanjay Dutt) figures that his pawn Himmat Singh has been found in Canada and sends his brother Shashank and Aditya, their bomb specialist to interrogate him. They were supposed to meet Neha who ends up planting a bomb in their car to “test” them – which was like a bit much. I would consider it a major red flag but Shashank ended up falling for her anyway. Meanwhile, guys these days freak out even if you respond too quickly to their texts.

Some action scenes are thrown in and those involve a lot of Spidermanish stunts. Be it Abhishek Bachchan jumping on cars to smoothly shooting three armed men or Sanjay Dutt just navigating roofs like he’s mastered Takeshi’s Castle, gravity is just a suggestion in this movie. But I genuinely loved Shilpa Shetty’s action scene in which she steps on a pillar to kick the terrorists’ ass, like a superwoman! Leaving questionable stunts aside, this brings me to appreciate how this movie, back in 2005 portrayed women as strong and equally good at fighting off terrorists or being one – like the fake Neha.

It had humour to balance out the seriousness of the plot – both intentional and unintentional. The latter being when they find out that ‘JEET’ is the code word of the secret operation these apparently high-profile and shaatir terrorists are trying to pull off. And the explanation? ‘J’ is the 10th letter and ‘E’ is the 5th, so that becomes 5th May. Again, ‘E’ is 5 o clock and ‘T’ is 20 which is a mystery. I mean, seriously? That’s so basic – we have these kinda questions in IQ tests and management entrance exams. But then again, this film is for the masses so I understand.

Eventually, fake Neha tells Shashank, in the middle of a big-time operation that she loves him after all. And then they take the bombs in a plane and crash it in a lake because there wasn’t any time to diffuse them. Really, this film was basic as an action thriller. But when it comes to plot twists and gender equality – it is an interesting watch. I wouldn’t mind a sequel, which is a bit more intelligent and complicated because I think we’ve watched enough episodes of The Mentalist to get there. We’ve crossed the CID and Crime Patrol level now and we demand more!