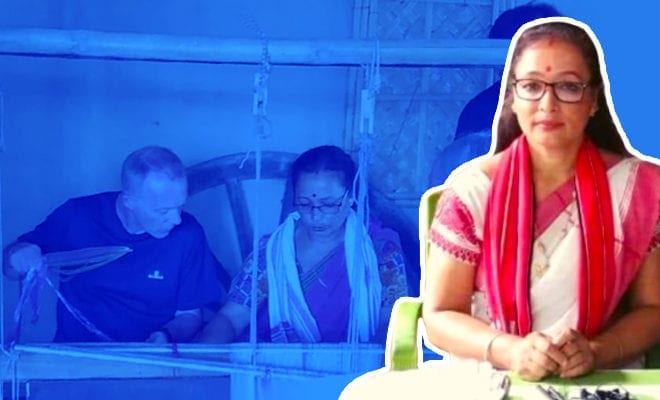 A great American art director, George Lois, once said and rightly so, that ‘creativity can solve almost any problem.’ A statement that was made decades ago, but is rather fitting even now. His words often have me wondering just how much we could solve together if we were only creative and imaginative about it. Could we achieve world peace? Equal human rights? Solve the problem of global warming?  The answer  doesn’t seem too far-fetched anymore. Because creativity is what this woman used to eliminate plastic and even make money off of it.

A 47-year-old lady from Assam, Rupjyoti Saikia Gogoi from the vicinity of Kaziranga National Park seems to have solved the plastic problem by coming up with an initiative not just to discard plastic the right way but also helping others to making a living out of it.

Living in the Kaziranga area of Assam, Rupjyoti saw just how much waste would often get collected around the area given that it was quite popular among local people and tourists, both groups as negligent about the environment as the other. Deciding to do something about it, Rupjyoti came up the idea of weaving plastic into decorative items as creative solution to the plastic waste disposal problem.

Also Read : Woman Activist In Bali Dresses As A Mermaid Amidst Plastic Waste To Highlight Pollution On Indonesian Beaches

As she started to collect various items of plastic waste from around the area, she started to use all of that to build into items like handbags, table mats, decoration items and doormats, among other other things. A project that started all the way back in 2004, and was called ‘ Village Weaves’, but has finally now grown enough to create a stir.

Rupjyoti shares, “I had started it in 2004 and tried to weave plastic waste. After initial success, I had started collecting discarded plastic waste from nearby areas and many other women in our area also got involved. I didn’t take any special training on it. I am very much concerned about our environment.”

She continued to say, “We have used all kinds of plastic covers, wrappers to weave that give a product a colourful finish. In 2012, we had started Kaziranga Haat to sell our products, including plastic waste used handloom products and other traditional handloom, handicraft products. Now, we are also selling our products through online mode as well. The demand for our products has gradually increased in foreign nations.”

As of yet she has trained more than 2300 women Assam, and we think that it is an impressive feat. Helping women not just do their bit towards the environment but also learn a livelihood while at it, Rupjyoti has been a vision!