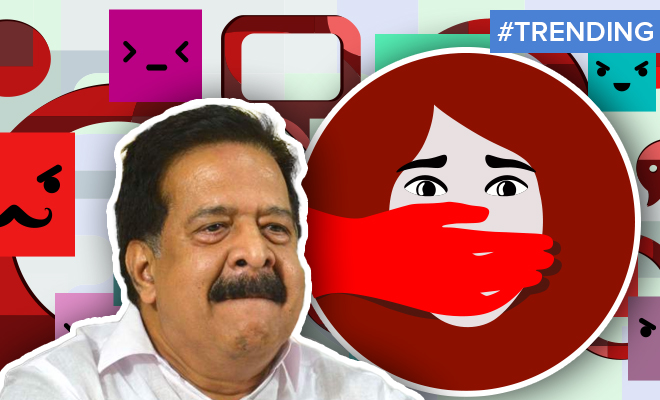 This Politician Said Something Spectacularly Stupid About Sexual Assault But Refuses To Apologise. We’re Not Surprised

Here’s the thing, sexism, gender-bias and misogyny are all around us. There is isn’t anything we can do or say that will make this better overnight. All we can do right now is call out the people who think it’s okay to drop unsolicited comments or say insensitive and unwarranted things about concepts like rape or menstruation. I know that most of the jokes men laugh at or most of the beliefs that they hold are derogatory towards women in some way. But when a politician, someone we have elected as a representative, says something insensitive and thoughtless, it stings. And let’s face it, we get stung a lot. It seems like our politicians either don’t have a filter on what they say or just don’t care about the fate of women. Or maybe it’s a little bit of both.

No one is asking them to be woke or politically correct in every statement they make. We know that’s not possible because a large chunk of politicians aren’t even educated enough to know the difference. But the least they can do is learn from each other’s mistakes and not make derogatory comments about women. Why do the people who are responsible for our progress and development find it so difficult to understand what a sensitive matter rape is? It’s not rocket science.

Before I tell you why we are so annoyed, let me give you a little context. Just yesterday, we talked about a 44-year-old nurse who was raped by a junior health official in Kerala. She had approached him in regards to her COVID 19 negative certificate and he asked her to come to his house to collect it. When she reached there, he tied her up and raped her. He physically assaulted her as well.

Ramesh Chennithala has proved himself to be not just an irresponsible politician, but also a disgusting misogynistic retard.

Congress President Sonia Gandhi should seek a public apology from him, for down playing the heinous nature of the crime & passing vulgar rape jokes.

Now, the accused has been arrested and there are claims floating about that the accused is an active member of the Congress Party. When a journalist asked senior Congress leader and Leader of Opposition in Kerala Assembly Ramesh Chennithala whether this was true, the answer he received was crude and tone-deaf.

The journalist asked Chennithala, “In the Thiruvananthapuram rape case, the accused is an active member [of Congress]. If all Congress persons started assaulting like this, how can women live?”

Chennithala replied saying, “Is it written somewhere that only DYFI (CPI-M youth wing) workers can sexually abuse women? These are all lies… that he is a Congress member, all lies.”

Is it written somewhere that all politicians have to be so misogynistic? What is he trying to say? That not just his party members but everyone can sexually abuse women? This comment is extremely insensitive. Also, why only blame Chennithala. The question asked by the journalist was problematic, to begin with. Both of them need to be called out for their inappropriate comments towards women.

Of course, the politician’s remark, especially, did not sit well with netizens. The same way it isn’t sitting well with us. They came at him giving him severe flak for his comment. People on social media demanded that Chennithala apologize. But of course, an apology would be too much for his fragile ego to handle.

After this turned into a full-fledged debate, Kerala Health Minister KK Shailaja stepped in and demanded an apology from Chennithala. She said, “Ramesh Chennithala should apologise for his remarks, insulting women. Nobody who insults women will have a place in the health department.”

Also Read: This Health Official From Kerala Raped A Nurse Who Approached Him To Get A COVID Negative Certificate. This Is So Shameful

At a press meet by Ramesh Chennithala today, a classic example of how much people can stoop. Journalist asks a really insensitive question on rape of a woman, Chennithala gives an even worse and insensitive reply. Is that what a woman voter shd expect from him?

After this entire uproar, Chennithala issued a clarification. I should highlight it was not an apology but merely a statement to save his behind and pacify the backlash he was receiving.

He said, “What I meant was, not just DYFI workers, but NGO and Union workers are also involved in sexual assault. What I meant was, there should not be any kind of assault against women. This is their agenda to divert the attention of the public from the two instances of rape. Requests people to not fall for that trap.”

He should’ve just apologized for his comment. First, he says DYFI, NGO and Union workers are involved in sexual assaults. Then he says he should be no assault of any kind on women. This is a feeble defense. Also, this is not a trap or some political feud. Chennithala made an unwarranted and highly inappropriate comment, and now he refuses to apologize for it. It’s not like this hasn’t happened before.

Politicians like him are the reason the state of our women is not improving. When he was asked that question, instead of talking about how rape is a heinous crime, he chose to make an insensitive comment to save his party’s name. The political sphere of our country is full of men like him who don’t want to see women uplifted.

Hopefully, this serves as a reality check for the journalist and Chennithala. So, the next time they are in the same positions, both of them can show a bit more empathy and respect.

Congress Leader Pankaj Punai Gets Slammed For Making Snide And Sexist Remarks Over PM Modi’s Sanitary Napkins Scheme. He Had It Coming.