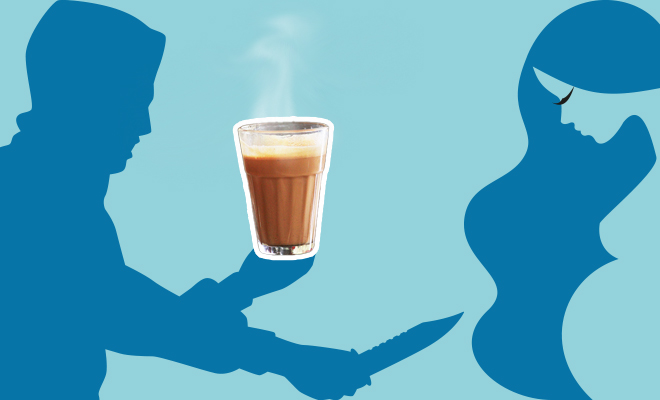 This Man Murdered His Pregnant Wife Because She Put Less Sugar In His Tea. Women Continue To Bear The Brunt Of Fragile Mental Health

Here’s the thing, I am not a morning person. I am grouchy and cranky and all I want to do is go back to bed for an extra few hours. I won’t even speak to anyone. The only interaction I have is either me snapping at them or just giving them a death stares. For me to come back my human form, it takes me a big mug of steaming hot chai.

To me, chai is what unicorn blood was to Voldermort in the first part of Harry Potter. It’s the purest form of happiness and it keeps me going. However, anyone who likes tea as much as I do can tell you that when someone makes it wrong or not the way you like it, it gets on the nerves. The question here is though, does it annoy you so much that you murder someone for making over a cup of tea? Apparently, that does happen.

In a gut-wrenching incident, a 40-year-old man murdered his pregnant wife in cold blood after over a quarrel about a cup of tea. This incident occurred in Barbar area of Lakhimpur district in Uttar Pradesh.

On Monday, Babloo Kumar completely lost his temper when his wife served him tea with less sugar in it. He began beating his wife, Renu and in a fit of rage slit her throat.

Also Read: This Man From Gujarat Brutally Thrashed His Wife After She Beat Him At Online Ludo. So Much Violence For A Game?

The couple had been married for 12 years and had 3 children together. Upon hearing their parents fight, the children woke up and saw their mother lying in a pool of blood gasping for air.

SHO of Pasgawa police station, Rakesh Kumar, said, “The couple fought because there was less sugar in the tea and the husband killed his wife with a sharp knife. We have recovered the murder weapon and the accused will be arrested soon. We are conducting raids to arrest him.”

Police officials have also taken statements from the children since they are witnesses to their mother’s murder. And an FIR has been filed against Babloo for murder who hasn’t been arrested as of yet.

You know, I understand this lockdown has been difficult and all of us are on edge constantly but there has been a spike in cases like these. I mean, this man murdered his pregnant wife because she put less sugar in his tea. Not to mention, their three children were only in the next room. How messed up does he have to be to do that?

People are now growing increasingly frustrated and are snapping at the smallest of things and this case is the perfect example of that. Unfortunately, it is always women that are on the receiving end. When mental health is fragile, it looks like women will pay the price.

A Man Tried To Jump Off His Balcony Because He Didn’t Like His Wife’s Food. Clearly, We’re All Messed Up Mentally