This Guy Sent Obscene DMs To A Woman And When Threatened, Apologised Instantly. And People Asked That He Be Forgiven 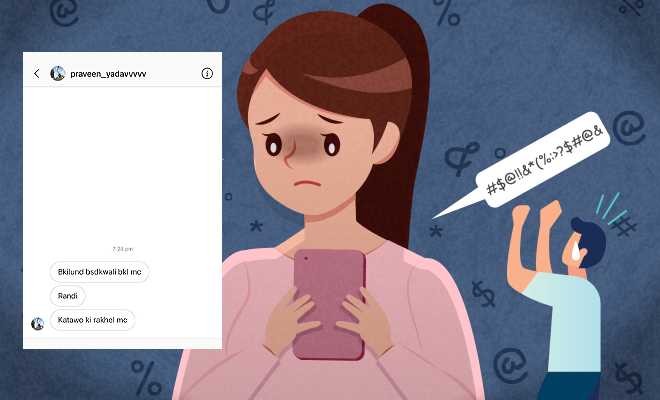 ‘It’s just a random message from a lowlife’, I thought when I first ignored a cruel, abusive text from a stranger online who couldn’t handle rejection. 6 years later, online abuse continues as men still can’t handle rejection and have made it a habit to constantly slide into women’s DMs and spam them with filthy, inappropriate messages and abuses. Of course, back then I didn’t know better than to turn a blind eye and move on. But today, as I came across a thread on Twitter, where a woman named Aanchal Agrawal shared the disgusting screenshots of a stranger sending her vile texts, it all came rushing back to me – the anger, the frustration, but most of all – the regret, for not taking action.

Using the current famous format of “How it started” vs “How it’s going”, to share the screenshots of a rather nauseating chat, Aanchal decided to not let it go and when she spoke up, it quickly turned pitiful. Aanchal recently made a meme out of a stereotypical cyber pervert who upon being ignored, bombarded her with curses, only to later apologise when he was intimidated by the mention of getting authorities involved. A typical move by a guy who knows he fucked up. Except, Aanchal wasn’t having any of it.

Staying strong in her conversation with the prick, she stuck to her decision of going up to the police, no matter how much the guy apologised, because let’s face it, we all know it was a desperate attempt to save his ass. But seems like the people in the comment section couldn’t help but extend compassion to the guy who minutes before was referring to her as a “R**di”. Making her feel guilty for not believing the man when he apologised, they wrote things like “Shandaar. I think he realized his mistake. Might give him a chance.” Because in our society, no matter what men do, a sorry should suffice as total retribution.

How it started. How it’s going. pic.twitter.com/PQFmVt9nkC

For people who are guilt tripling me. pic.twitter.com/HEjQGBBgz3

Considering she must’ve cringed just as hard as we did upon reading the several comments taking the guys side, she attached yet another screenshot of women who reached out to her, sharing their experience with the guy, who did the same thing with them. So much for “realising his mistake”. She captioned this one, “For people who are guilt tripling me.” (sic) Because clearly, it wasn’t just the guy who needed to be shut up, but everyone else who was putting the onus of his inappropriate action onto the woman, by pressuring her into forgiving him.

You see, these perpetrators, casually lurk on the border of creepy to straight up offensive. At first, they slowly tiptoe into DMs with their ‘Hie Dear, plz fraandz’ messages, and when these are ignored or left unanswered, they get offended. The hello and niceties are tossed aside as they launch a one-sided conversation with either a dick pick or an abusive slur, or most of the times – both. But that is not what even surprises us anymore. What does in fact startle us, is how quickly these lurkers back pedal conveniently pushing the blame either on a ‘friend’ or by writing out a sob story about how he has family or that he might face social ostracisation. Online abuse has gone beyond basic apologies.

Shandaar. I think he realized his mistake. Might give him a chance . Upto you .

He realised. Give him a chance , maybe he can turn to be gentleman.

From people on my Instagram about the same guy. pic.twitter.com/DwWnURG24V

Even the threat of a woman screenshot-ing the messages they send, and threatening to file a complaint to the police doesn’t keep these men from sending such abhorrent messages in the first place. They’d rather try their luck, into either enticing the women with their cheap words, or pushing her into silence just because they feel they can. Such priorities, much wow.

The two contrasting screenshots held a mirror up to not the just the society and the perverts who hover on the internet, abusing over women who don’t give into their sexual advances, but also to the fact how we may have been responsible in putting them in a position of power in the first place. Every time we blocked a guy who send us cheap messages, or quickly went offline as we were bombarded with revolting DMs, we were letting them drive us into silence or intimidation, when they should have been the ones feeling ashamed and chased away.

By ignoring such online abuse, giving into the fake apologies, we are helping in normalising this violent and abusive online culture where no matter what men say to women, they will always be left off the hook. Enough of getting silenced, of letting these men slide in and out of our DMs without any fear of consequence for their insidious behaviour. We support women like Aanchal to come up and expose just how dirty the men can be, and that two can play this game. It’s time people learned through example.

Also Read : From Lewd Messages To Parents Video Calling Them, Teachers Are Facing Abuse While Conducting Online Classes. Is This What We’ve Come To?