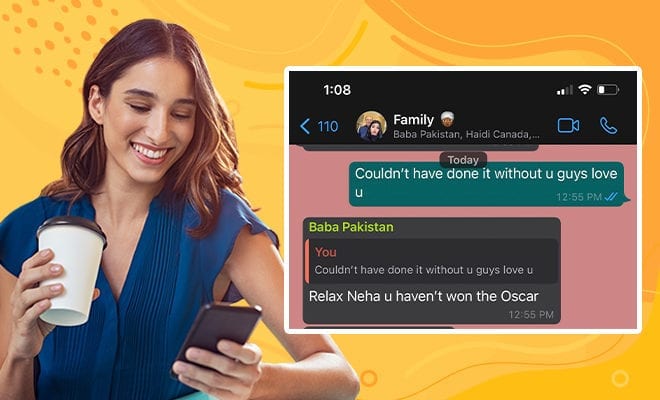 While a lot of times, all dads are generalised into a similar type – protective, straight-forward, old-school, ‘Desi Dad’ are a whole different category to be put under than the rest of them out there. A totally unique breed of fathers, Desi dads are usually identified by their strong dissent towards everything that their kid does or wants. Their need to drop in at least 10 taunts a day at their children for being on their phone, and are constantly itching to deny permission for all plans and most of all – their uber savage replies, most of the times without an emoji to soften the blow.

And presenting to you a mighty little proof of that savagery, is the latest story of a desi dad and his daughter, who have gone viral after a text exchange between the two was recently posted on Twitter, kicking in a chain of reactions from netizens like us, who could very well relate.

A twitter user Neha who goes by the username @ughneha and hails from Toronto, Canada posted a rather hilarious text conversation that went on in her family group on WhatsApp after she announced the news of getting a new job and dropped a message of gratitude for her family who helped her with it.

told my dad i got a new job and this is his response? 🥰 pic.twitter.com/8rROnxI3wH

Also Read : This Hilarious Video Of A Woman Struggling To Parallel Park Has Gone Viral

Going beyond the conventional norms of courtesy, Neha’s desi dad responded to her message with so much sass, that the screenshot has now gone viral on the internet for it. Replying to Neha’s “Couldn’t have done it without u guys love u” message with a savage one liner that read, “Relax Neha u haven’t won the Oscar”, her father’s reaction sent everyone on Twitter into a tizzy.

Not only was it hilarious, it was also something most of us could imagine our own dads saying to us, because that is just classic Desi Dad material. Captioning the post as, “told my dad i got a new job and this is his response?”, Neha’s post has over 32 thousand re-tweets and more than 400 thousand likes!

are you telling me dad's respond with stuff other than "ok" 🤯

One user wrote, “My dad just hits me back with the “Ok ” or the “text me later I’m busy at work,” while another one commented, “are you telling me dad’s respond with stuff other than ‘ok.'” After all, the struggle for every desi kid is real!

Also Read : A Video Of A Woman Making Rotis Has Gone Viral Because Of Her Smile