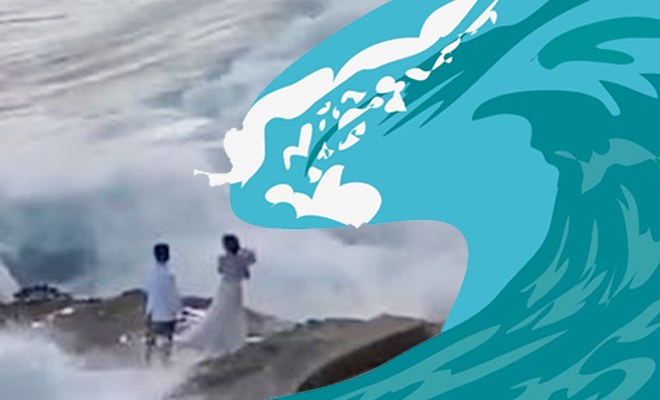 This Couple Got Swept Off By A Wave During Their Wedding Photoshoot. Whoa, This Is Scary

We have seen people going to great lengths just to get the perfect click. And I am not even using lengths as a metaphor here. There have been photos of people taking selfies at the rooftop of hundredth floor of a building or sitting on a cliff for their #wanderlust photo. The mere thought of me sitting on the edge of death like that gives me chills. But that’s not the case with everyone, I guess. And this is especially not true for couple shoots – the ones they do before the wedding and during it – where they must look like they are having fun and that they love each other while a ghagra flutters in the background. Yeah, I don’t get it either. But hey, to each their own.

Take this newlywed couple for instance, whose photoshoot video went viral for all the wrong reasons. The couple was posing on the coastal rocks at Laguna Beach in California when they got pulled into the Pacific Ocean, yes the Pacific Ocean, by a big wave. Imagine! You are just creating happy memories with your new husband and suddenly your wedding photoshoot becomes an episode of ‘Destroyed in Seconds’.

Fortunately, the couple is safe and didn’t sustain any injuries, thanks to the lifeguards who rescued them. The whole thing was captured on the video by someone watching from the nearby hotel who also called for help. My guess is he was just capturing the happy couple having the time of their life when the giant wave swept them off their feet (excuse the pun).

Also Read: This Video Of A Daughter Playing Water Pranks On Her Daddy Is The Cutest. And Her Laugh Has Everyone Smiling

You can watch the video here:

TO THE RESCUE: Lifeguards saved a wedding couple that was swept into the Pacific Ocean while taking photos in Southern California. https://t.co/mScYDkMWmh pic.twitter.com/RTvJQmzFC2

In the video, the bride and the groom can be seen posing on the edge of the rocks on the beach when the wave engulfs them. Apparently, this is a popular spot on the Treasure Island Beach for photoshoots but clearly this was not the right day as the tides were high (and also, it’s 2020, we are expecting aliens to attack us any time now). Next, the lifeguards run to the rescue and get the couple safely to the shore with the help of a rescue tube.

The tragic photoshoot and the dramatic rescue is being shared on social media where netizens are expressing concerns and trolling the couple for their negligence. They pointed out the risk the couple took and thanked the local lifeguards for their service. “I know you don’t hear it enough, but thank you for being there (lifeguards) and once again helping👏👏👏 those who need you,” a twitter user wrote. Another wrote, “Well I hope they got some good pictures at least.” Someone tweeted “I hope this does not mean that their marriage is on the rocks already.” “This is a very 2020 moment,” a twitter user wrote and honestly, I couldn’t agree more.

It is definitely scary and we are glad everyone is safe. But seriously, it’s alarming, the extent people go to just to get the perfect shot. Their happiest day could turn into the most tragic event of their lives if it was not for the lifeguards and yes, the one who was filming the video and called the rescue team. Anyway, all’s well that ends well. We wish the couple an ocean of happiness *wink*.

Also Read: This Couple Salsa Danced On The Sidewalk While Maintaining Social Distancing. This Is Proof That Everything Is Going To Be Okay