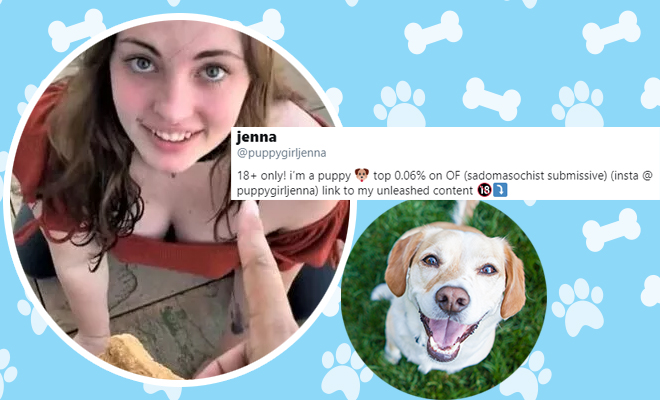 This 21-Year-Old Social Media Influencer Earns A Six Figure Income Each Month By Pretending To Be A Puppy. I Am Clearly In The Wrong Profession?

Being a 23-year-old millennial is harder than it looks. Granted we spend nearly 40% of our time scrolling through social media and laughing our pants off at things that only we and a handful of other people find funny. But still, it’s tough. Now, I am not an active part of social media (stop gasping!) but even then, you will find me scrolling through looking for a good laugh.

In my quest for laughs, I have come across some truly bizarre things. People dipping eggs in their chai, dogs riding skateboards (okay, that’s adorable), monkeys playing the piano, a woman who makes bread using her vagina’s yeast, the Kylie Jenner Lip challenge, Kylie Jenner herself, people icing their vaginas, an egg with its own Instagram page- you see, the list goes on and on. This is not even one-third of it. Although never in my entire social-media-using adult life have I come across something as absurd as what I am about to show you.

Are you ready? I know people do a lot of weird things to make money but this takes the cake.

There is a woman on social media who makes videos of herself pretending to be a dog. Yeah, I am not kidding. The best part? People pay her to pretend to be a dog. Her monthly income is in six figures. Reconsidering all your life decisions? Me too.

The woman I am talking about is 21-year-old Jeanna Phillips from Austin, Texas, who is a former optician. She says that she has always felt like a puppy at heart, so now she earns her living by making videos of herself pretending to be a dog. She goes by the username, yourpuppygirljenna and the dog tricks she does include- rolling on the floor, chasing a ball, eating treats well, you get the picture.

Although I have a very strong feeling that’s not all she does. You see, she has a small army of followers paying $20 (around Rs 1,500) each month to watch some of her to put it delicately, not so safe for work content on a platform called OnlyFans.

A lot of her earnings come from taking special requests from people and making bespoke videos. According to reports, one user paid her $1,000 (around Rs 75,000) for a video. Oh damn, that is a lot of money. Am I in the wrong profession? I think I’d make a cute doggo.

This is hilarious but also border-line cringe-y. Maybe I haven’t explored enough but I can’t imagine someone with a kink like this one. But then again, I find foot fetishes creepy, so this is just bizarre to me. Although, this is why I love the internet. Such communities are very common online if you know where to look.  If you are willing to pay for it, there is almost nothing you can’t find. Eerily interesting, isn’t it?

Also Read: This Health Blogger Has Been Drinking Sperm Smoothies Because She Thinks They Boost Immunity. WTF Is Going On?

repost hehe forgot to add my tag 🐶 my owner said he is taking me on a walk when he gets back if i’m good 🥳 pic.twitter.com/whGxdGNE2W

Talking about why she chose this profession she said, “I feel like a dog. I just want to roll around, play fetch, get head scratches, run around and play. All of that. I have always acted like a puppy, but not in a sexual way at first. I used to pretend I was a puppy when I was growing up. I really love praise. I love hearing ‘good girl’. It makes my heart melt every time.”

She continued, “OnlyFans was just a hobby before but I had just been doing ‘vanilla’ stuff. I then realised there wasn’t really a market for female ‘puppies” Further adding, “I thought screw it, why don’t I create the market? I know there’s a demand for it so why don’t I supply it? It’s now my full-time job. My revenue has increased 100 times since I moved to puppy play content. I’m making six figures monthly. If somebody tells me what they want, I will give them a quote. The more kinky you want, the more it will cost.”

You know, I have always found kinks very interesting. I mean, there so many weird things in the world that turn people on. A girl pretending to be a puppy is funny but not sexy. Well, not to me at least.

But hey, to each its own right? Besides, she is kinda cute.

This New TikTok Challenge Involves Stuffing Ice Cubes Up Your Vagina. Seriously, What Is Happening To The World?