The Union Cabinet Increased The Upper Limit Of Abortion To 24 Weeks. We’re Glad, This Is A Step In The Right Direction 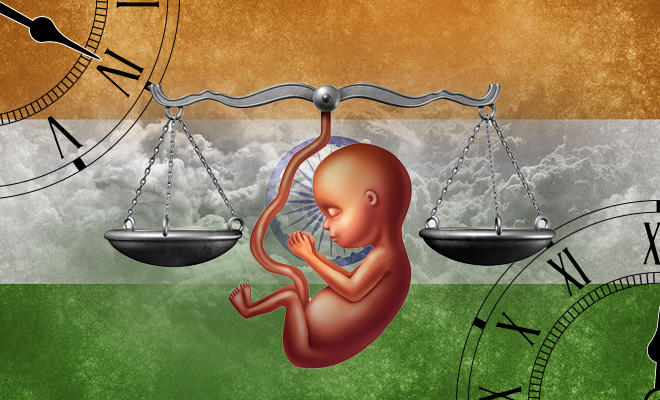 Women in India have not been treated right ever since the beginning of time. It is a record that every single woman here has at least once in her life experienced either some form of eve-teasing, sexism or both. We are conditioned to believe that we only belong in the kitchen serving the men of the house. We are also taught how to dress, how to walk, how to laugh, how to wear our hair, how to speak, what to believe in and of course how to keep our heads down to avoid attracting unwanted attention (the list goes on and on). Basically, through all these years we have has zero control over our minds and bodies.

But like I mentioned a bazillion times before things are changing slowly and steadily and that is all we can hope for right now. Take this for instance. In an iconic decision the Union Cabinet has extended the upper limit for permitting abortions from 20 weeks (5 months) to 24 weeks (6 months). I think this decision is the best one our government has made since they came into power. And looking at the state of women in our country right now, I would say we desperately needed some good news.

Talking to the press, Union Minister Prakash Javadekar said that this reform would ensure safer termination of pregnancies and give women further rights on their reproductive systems. He said, “In a progressive reform and giving reproductive rights to women the limit of 20 weeks of medical termination of pregnancy has been increased to 24 weeks,” He further added “This is important because in first 5 months there are cases where the girl concerned doesn’t realise and has to go to court. This was discussed with various stakeholders.”

Also Read: Abortion Is A Criminal Offence In India And Women Can’t Decide If They Want One But That’s Set To Change

The Union Cabinet raised the upper limit for allowing abortion from the present 20 weeks to 24 weeks https://t.co/jui4Cl1p2e

This change comes after the centre in September 2019 argued that the right to a women’s autonomy over her reproduction system did not outweigh the state’s vested interest in protecting the life of a foetus. And considering our government is 70% male and right winged, this decision is as shocking as it is amazing.

A press release that was circulated after this decision came to light read, “Enhancing the upper gestation limit from 20 to 24 weeks for special categories of women which will be defined in the amendments to the MTP Rules and would include ‘vulnerable women including survivors of rape, victims of incest and other vulnerable women [like differently-abled women, Minors] etc’.”

This amendment to the already existing Medical Termination of Pregnancy Act, 1971 will be introduced in the next Parliament session. It will make the lives of women who have been through sexual assault so much easier. Now they will have only one long and hard legal battle to fight. We are really waiting for this bill to be implemented.

Also Read: A Show On Indian Television That Talks About Sex And Other Taboos? Yes Please!

Around the world, the average upper limit for abortion is 24 weeks. As everyone knows, USA is still crucially debating these laws after a few states have passed anti-abortion laws. In Canada, reports say that no woman can get an abortion over 24 weeks as long as there is proof that the pregnancy has some severe complications. Australia, on the other hand, sets its abortion limit at 28 weeks. In Saudi Arabia, abortion is only legal if a panel of specialists declares that carrying out the pregnancy will lead to the death of the woman. The upper limit for this, however, is 20 weeks.

If you compare this new reform that we are about to pass to the rest of the world, you will realize that this is finally a step in the right direction. I mean, now we have a more liberal abortion law than most countries. It is empowering and well thought out and we hope we continue taking steps like this one.

This law must be celebrated!