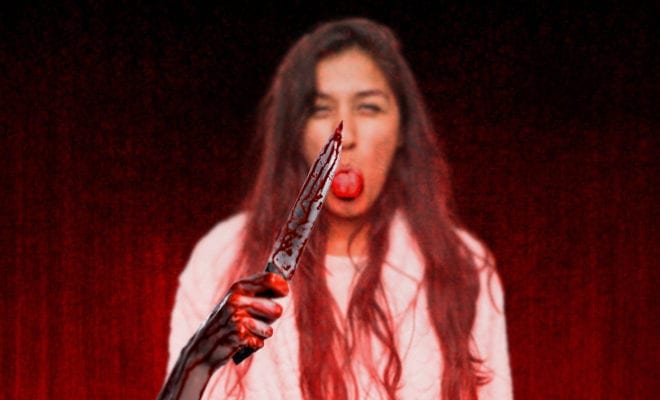 Michael Scott, in the hit TV show The Office, once said how, ” I am not superstitious, but I am a little stitious”. A fact that even though might have been true for him and most of us from this generation of woke people, is certainly not true for the rest of our population in India that still finds it hard to separate themselves from the age-old customs and traditions that lead them to hurting their selves in the name of belief. Struggling with whether to call this faith or a display of utter idiocy, but in the name of belief and superstition, the state of Tamil Nadu has witnessed yet another woman sacrificing herself to keep a promise that she made to a deity.

According to her, if the deity would help in making the Dravida Munnetra Kazhagam (DMK) win in the state assembly elections, the woman had promised to chop her tongue off and present it to the deity in the temple as a sacrifice for keeping her wish.

The woman who has been identified as a 32-year-old lady named Vanitha has been currently taken to the hospital after she did actually cut her tongue soon after the DMK won in the 2021 assembly elections. The reports share that on the day that DMK won the mandate and the results were announced,  Vanithaa reached Muthalamman temple in the morning, cut off her tongue and tried to offer it to the temple deity.

However, since the temple gates were closed due to covid restrictions, Vanitha left her cut out tongue at the temple gates and collapsed right there. She was rushed to the nearest hospital and is currently undergoing treatment for maiming her ownself.

On the political front, DMK has won over their rival AIADMK in Tamil Nadu after almost a decade, making it a bigger deal for them to now be in power. And while it may be a cause for celebration, what is in fact a cause of concern is how in the name of worship and faith, people continue to get influenced by superstitions that put them in harm’s way.

Also Read : In This Indian Village, Menstruating Women Are Not Allowed To Fetch Water From The Village Pond Due To Superstitions