Taapsee Pannu Says People Asked Her To Let Men Be In The Spotlight. Why Are Indian Men So Freaking Insecure? 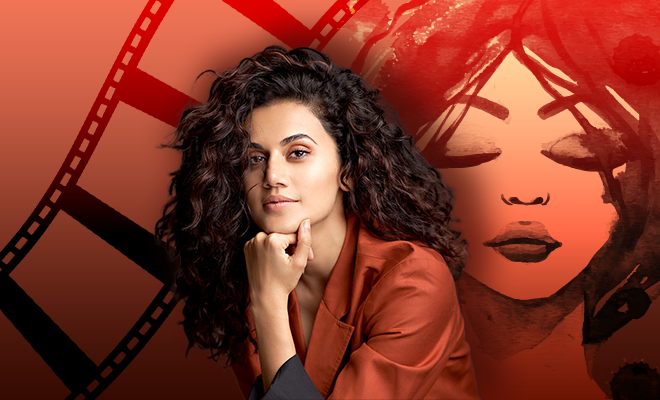 There are a lot of definitions of feminism that are doing the rounds today. Some say the feminism movement is solely based on male-bashing, some say it is about women gearing up for global domination (that would be amazing). But being a literature student, I can tell you that the only thing feminism stands for, is equality. Women have always been referred to as the “weaker sex”. And I mean, it’s changing but we women can hardly claim that we’ve got our place under the sun. The men have been hogging it all.

So when are whining about not getting enough, we get a little annoyed. We can’t step out of the house without a can of pepper spray, you think you’ve problems? Indian men especially get uncomfortable with strong women. In a relationship, they want to control what she wears and who she talks to. In an office, men will most happily shut down a woman and interrupt her without as much as apologising.

The reason I am on this rant today is that Taapsee Pannu said something in a recent interview that I just keep thinking about. She said “I have been advised by people in this industry that you should let men take the centre stage now. You are only doing women-centric films. When I tell them that I also did Mission Mangal, they say but that’s again a strong female character. Toh kya karu? Kuch bhi flimsy sa role kar lun? (Then what should I do? Should I do flimsy roles?).”

Also Read: Taapsee Pannu Says Badla Was Called Amitabh Bachchan’s Film. And She Had More Screen Time In It. We Totally Get It

When I read this quote, the part where she is talking about people asking her to let men take centre stage really got me thinking. Who are these men in Bollywood who ask people to convey this message to actresses? Especially actresses like Taapsee who are trying their best to advance the cause of women. If asking women to step aside so all the spotlight can be shone on the “hero” is not a distinct sign of their insecurities, I don’t know what is.

Actors in Bollywood practically have it all. For decades they have been the sole attraction of a movie and through that, they have made more money than they know what to do with. So where do these inhibitions of women stealing the thunder stem from? Actors today have transitioned into producers and directors. They are on top of every “Richest People” list while the actresses are make it to the top ten. The actors demand better pay, because aren’t they really drawing the numbers? This statement by Taapsee really does shed a light on a deeper issue. I can’t wrap my head around the fact that men are so afraid to have women at the forefront that someone has to tell an actress to stop doing women-centric roles.

Also Read: Every Headline About Mission Mangal Crossing 200 Crores Calls It Akshay Kumar’s Film. So No One Is Going To Credit The Women?

I’ll give you a simple example. A movie like Mission Mangal which was helmed by five women was called “Akshay Kumar’s movie”. It was his face at the centre of all the posters, with the women at the back. Why? It was essentially because of the amazing work that those women did that the movie did so well, so why was it all credited to Akshay Kumar? When Sonakshi Sinha was asked about this, she had said jo bikta hai woh dikhta hai (What sells is shown). There is something so problematic about this statement. Yes, Akshay Kumar is one of the biggest names in the industry but why are we giving out the message that “he is a man and that is why he gets to be in a spotlight?’

I would say we need to stop doing this, but I know this is going to take some time. Till then, why should boys have all the fun?