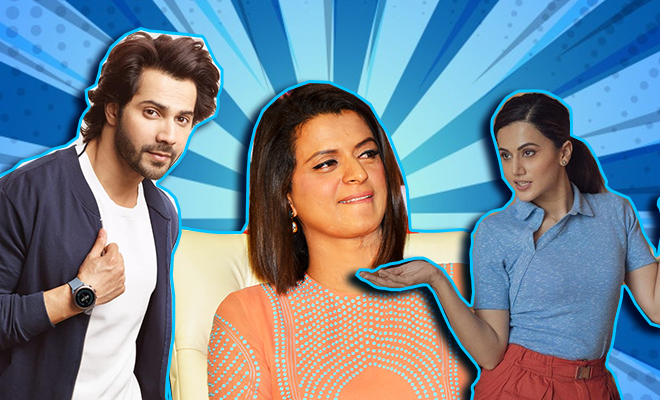 There’s a storm brewing. And I am not talking about the thunderstorms in Mumbai. Kangana Ranaut and her sister Rangoli Chandel have been mocking celebrities, journalists and basically anyone who crosses their path. Even if the conversation is complimentary, they still go after everyone. Recently, Rangoli Chandel took a dig at Varun Dhawan for not mentioning Kangana Ranaut’s name during his Judgemental Hai Kya appreciation tweet. We know how protective she gets about Kangana Ranaut, but she took this too far. Rangoli Chandel also mocked actress Taapsee Pannu, calling her a sasti copy of Kangana.

The Game Over actress Taapsee Pannu pulled a Rangoli Chandel on Varun Dhawan. We know that Varun and Taapsee share a great bond off-screen , which is why Taapsee pulled Varun’s leg for missing out Bhumi Pednekar and her name in Saand Ki Aankh tweet. Actor Varun Dhawan who is a social media-savvy, applauded the Saand Ki Aankh teaser which took the Internet with a storm immediately after its release. The Judwaa 2 actor wrote, “Proud of you Tushar. Bringing real Indian heroes on the big screen. Best dadis.”

Mocking Rangoli Chandel and throwing major shade,   Taapsee Pannu tweeted back saying, “Arre Varun but u have not written our names y no appreciation for us. Why why why? (sic)” To which Varun Dhawan immediately replied, “Taapsee and Bhumi are naughty dadis.”

Taapsee Pannu, unlike other actors from the fraternity, didn’t stay silent but rather gave it back to Rangoli in the best way possible! We love Taapsee for this even more, finally someone had the guts to do something like this.

For the ones who are unaware of where and how his started, a week ago, Rangoli Chandel trolled Varun Dhawan for missing out Kangana’s name from the Judgemental Hai Kya tweet, where he appreciated the entire team of the film. Rangoli Chandel wrote, “Kangana ka bhi naam likh dete sir!! Wo bhi kisi ki bachi hai usne bhi mehnat ki hai!!! @varun_dhawan (sic).”

Interestingly, while applauding the movies trailer, Varun did not mention any actor’s name in his tweet. He wrote, “What a mast trailer. Amazing lead and supporting cast backed by some great writing. Looks like a lot of fun #JudgementallHaiKyaTrailer”

What a mast trailer. Amazing lead and supporting cast backed by some great writting.Looks like alot of fun #JudgementallHaiKyaTrailer https://t.co/S3uM5vlmp5

What are your thoughts on this?!