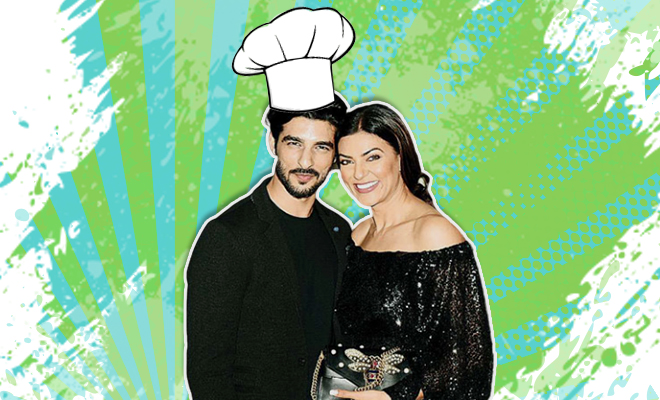 Sushmita Sen Talks About How Her Boyfriend Rohman Shawl Is Better In The Kitchen. Gender Roles Mean Nothing To This Couple And We Love It

Contrary to what the society will have us a believe – that women are  best suited and perhaps biologically equipped – to be home makers, I was born into a rather different, and more free belief system. You see, in my house, there was no such distinction made between my brother and I when it came to educating us about survival skills. From cooking to driving, we were both taught equally and without any expectations. Which is perhaps why, never having felt pressurised to give into the gender roles that dictated the rest of the society. And one woman who has flipped the bird to society’s expectations for as long as I can remember is  former Miss Universe, Sushmita Sen .

As revealed in a recent interview with Rajeev Masand, Sushmita Sen admitted to how her boyfriend Rohman Shawl has always been better in the kitchen than she could ever hope to be. Talking about assuming responsibilities during this quarantine, Sushmita was asked whether she too has her ‘chef’s hat’ on, to which she replied, “It’s never been my thing. Never ever, though I know how to make anda bread and have made it for my daughter. Rohman got lucky once.”

She then further continued saying, “But I think Rohman is better in the kitchen. He is amazing with cooking. I don’t know how he does it but his eggs are better than what I cook and he makes the world’s most incredible coffee. Renee cooks really well. Alisah is not allowed, but if she were given an opportunity, she would do rather well. I have other gifts.”

Also Read : Turns Out, Sushmita Sen Got Her Miss India Winning Gown Stitched By A Local Tailor. Wait, It Was Not Designer?

And right there, as Sushmita pointed out the dynamics of her relationship with her boyfriend, we were kinda glad and relieved that it wasn’t tainted by the society’s definition of how a man and a woman must divide chores among themselves. For years, women were taught to take charge of the kitchen, while men take charge of the house and earning a living. Anything besides which would only bring shame to their kind. But today, as the gender roles stand fluid, and as men and women equally divide up the household responsibilities , we are made to think that times are really changing, and for the better.

The couple that has since long been setting incredible couple goals for us, has once again given us enough food for thought and reason to look up to them, for  we are pretty sure this is what a healthy relationship looks like. Sushmita Sen is currently quarantining with her two daughters, Renee and Alisah and her boyfriend, Rohman, making the most of this time together with her family.

Also Read : Bollywood Celebrities Urge People To Stand Up Against Domestic Violence During This Lockdown. We Think It Is About Time.