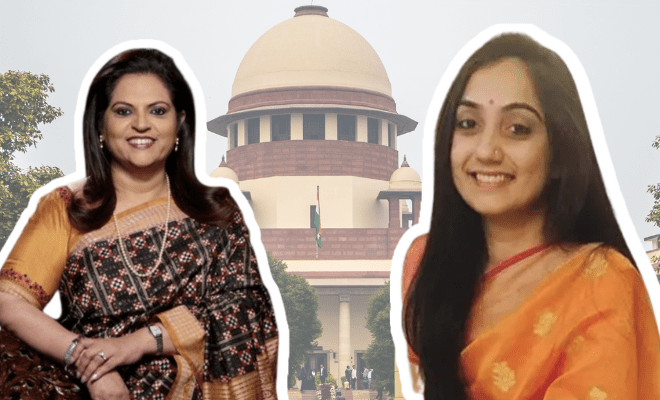 SC To Nupur Sharma: “If There Is A Misuse Of Debate You Should’ve Filed An FIR Against Anchor”

India is in a state of chaos after now suspended BJP leader Nupur Sharma’s remarks on Prophet Muhammad led to country-wide protests and several Gulf countries also called upon Indian diplomats to reprimand them for the same. The most recent horrific incident incited by the remarks was the gruesome Udaipur killing. And now, the Supreme Court lambasted the BJP leader for her comments and blamed her for the Udaipur killing and suggested she apologise to the entire country. While hearing the petition filed by Nupur Sharma to club all the FIRs filed against her for her comments, a two judge bench of the Supreme Court questioned why was the channel debating upon a case that is sub-judice and also pointed out that an FIR should’ve been filed against the host of the show if she provoked the remarks.

What has Delhi police done ?

Don't make us open our mouth ? What was the TV debate for? Only fan an agenda ?

Why did they choose a sub judice topic ?#SupremeCourt #NupurSharama #NupurSharma

A vacation bench of the Supreme Court comprising Justices Surya Kant and JB Pardiwala was hearing the petition when Justice Surya Kant questioned, “What was the TV debate for? Only fan an agenda? Why did they choose a sub judice topic?” The court further questioned the police for the way they handled the case. Further, he counsel for the BJP leader pointed out that the statement made by Nupur Sharma was a response to a question asked by the anchor of Times Now, Navika Kumar while alleging that the question provoked the BJP leader to respond with the remarks that she made. In response the Supreme Court pointed out that if that is the case then an FIR should have been filed against the host of the show as well. Justice Surya Kant was quoted by Bar and Bench saying, “If there is a misuse of the debate, the first thing she (Nupur Sharma) should have done was to file an FIR against the anchor.”

During the hearing, the Supreme Court also blamed the BJP leader for igniting emotions across the country and setting it on fire due to her “loose tongue”. It further added that she is “single-handedly” responsible for everything this is happening in the country. The Bench also said that they saw the debate on her was incited while adding that it’s shameful that she said the things she said and later revealed that she was a lawyer.