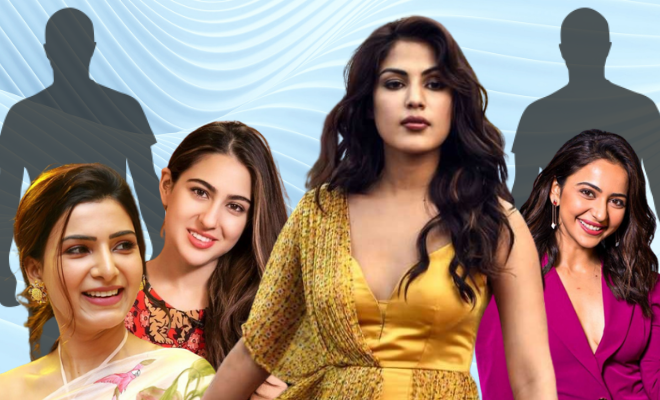 #SorrySara And #SorryRakul Trend After Conflicting Reports Of Drug Use Do The Rounds. Why Have No Actors Names Have Popped Up?

For some people in the country right now, we are in the middle of a dramatic crime thriller, one that is filled with false alarms, foul play and an overwhelming need to see justice delivered. Every day, the plot thickens. But more than the instrumental pieces of the investigations coming to the fore, where the police and the laws take stringent action, what we’re dealing with here is a media circus where everyone wants to call dibs on breaking stories first, and then our trust. Oh and did we say, sexist? Keep reading.

We’re talking about the latest update that has thrown up 3 popular names from the industry on information of them being involved in having had drugs. Sara Ali Khan, Rakul Preet Kaur and Simone Khambatta, were the three names that were reported by the Times Now, earlier on Friday, during the probe (we are not sure if this probe was lead by the news channel or the law). News, rumours, memes made the rounds as the women were trolled and slammed for their involvement. People wrote things like, “Remove #SaraAliKhan from your ads. We’re done with Nepotism & those who consume DRUGS. If you want us to use your products, then take immediate action.” Meanwhile, another user praised NCB for their effort, by writing, “3 More druggies of Bollywood Exposed. Great Work @narcoticsbureau. Clean Bollywood, don’t close this matter until all druggist are EXPOSED & arrested.”

Again, this news was unverified till then.

Remove #SaraAliKhan from your ads.

We're done with Nepotism & those who consume DRUGS.If you want us to use your products, than take an immediate action.

However, soon after, NCB released a statement saying no Bollywood list has been prepared as of yet, and none of the names taken have been zeroed upon. Within minutes, armchair activists did a u-turn, making #SorrySara and #SorryRakul trend while apologising to the stars for the rumours. However,  one thing that has remained consistent during the entire investigation, is how swiftly and neatly it has exempted men of any blame, responsibility or even doubt.

It’s rather strange, if you think about it, how up until now, not even one man from Bollywood has been pointed fingers at. Meanwhile, women are being named, shamed and boycotted left, right and center. Almost as if the society is certain that the cause of death of a man has to be found in the guilt of a woman alone, because nothing else would serve as a fitting end to this highly scripted and misogynistic investigation.

From pulling Rhea into the probe, holding her accountable some way or the other, to being charged for smoking marijuana, to leaking names that were surprisingly all female, we can’t seem to agree that all of this is just a mere coincidence. Of course when a man is being questioned, none of this ever happens. All channels talk about is dignity as an actor, how innocent he might be even with guilt hanging over his shoulder, and how triumphant his walk was after he walked out of the jail, having served his sentence.

And then people say, they don’t understand the patriarchy angle in this. Because where we’re looking from, it seems like the truth doesn’t matter anymore, as long as a bunch of women are being held responsible here.

Guilty Or Not, Nothing Justifies The Media Mobbing Rhea Chakraborty. The Invasion Of Her Personal Space Needs To Stop