Soha Ali Khan Was Trolled Brutally On Her Picture For Looking Too Old. Matlab, Kuch Bhi 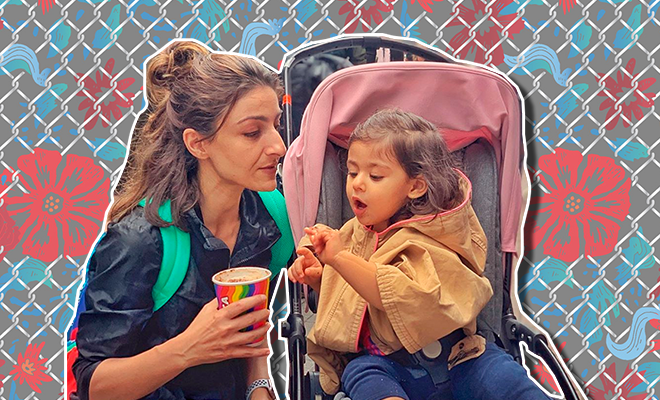 It’s 2019 and most of us can’t function without our phones and social media for even a day. I want to say we are addicted but we would be understating it.  Social media is a super fun place to connect with people, express yourself and of course, share memes. And while there’s a lot of fun to be had online, of course, there’s a flip side to it.  That it can be a cauldron of negativity. And while the occasional annoying comment can bother us, Bollywood celebrities often have it the worst. Celebrities get trolled for no good reason and now it’s just getting old and annoying. Recently actress and mommy Soha Ali Khan had to face backlash on her Instagram post, which honestly, looked fine to us.

Soha Ali Khan had shared a picture with her daughter Inaaya, where the little munchkin is looking all cute and curiously trying to figure out what’s in Soha’s coffee cup. The mother-daughter duo look super adorable together but sadly the picture received a lot of negative comments. Some users brutally trolled Soha Ali Khan by commenting on her picture saying that the actresses face looks aged and wrinkled. The trolls didn’t take much time to point that making the entire comments section a negative place filled with unsavoury comments. Soha Ali Khan had captioned the picture, “Babycino anyone?”.

Check out the comments!

Let’s cut the woman some slack, shall we? Maybe Soha Ali Khan was just too bored to give fucks about dressing up or was exhausted looking after her child or something, who are we to judge? Whatever the matter is, commenting on anyone’s post in such a manner or mercilessly trolling them on something that would bring no joy, simply needs to stop.

Also read: This Inspiring Woman Shut Down Trolls Attacking Her For Her Disability And We Think She’s A Rockstar

This isn’t the first time a celebrity is being trolled! These stars face negativity and judgement on a daily basis. Most recently, actress Kareena Kapoor was trolled for her sun-kissed photo in Tuscany. We don’t get it.