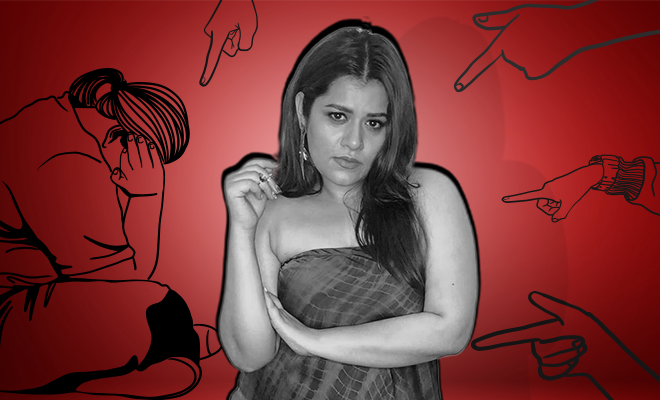 Beauty is increasing becoming a hazy concept. I mean, it used to mean one thing – that you had to be skinny and fair – and now it’s just owning who you are. Whatever size, whatever colour. I think we, as a generation, no longer have the patience to deal with one kind of body or one kind of colour. We want more but we guess we aren’t saying it enough. When actresses like Shikha Talsania say that one needs to stay body-positive, more people listen and those are the voices that need to be amplified. Everything she said is so relatable and I stand by her a hundred percent.

She goes on to say that if you don’t own your body it forms a pathway for people to judge and criticise you for it. Sometimes people attempt to take the sting out of these comments by lacing them with humour but it’s far from funny. We don’t even crack a smile. Though now Shikha is comfortable in her own skin, she reveals that her own battle with body-issues is not over yet.

” I still struggle with it (body image). Everybody does. And the entire human race does – we’ll keep struggling with it till kingdom come because humans are vain creatures. And we live in a world that thrives on insecurities (body, mind, privilege etc). The only way to cope is to take it one day at a time, work on you mind, body, heart and soul every day. And love. Fill your heart with love for yourself and everyone and everything around you,” She said in the same interview and we believe she really has hit a nerve. She has said everything that we know but don’t want to admit, lest our insecurities get the better of us.

She also said that she thinks there are some major changes in play, not only in Bollywood but all over the world. This comes from the fact that she was one of the protagonists in a major commercial movie. She says that people are becoming more inclusive and aware than they used to be and now it will only move upwards. We just have to say that we completely agree with her. 10 years ago if someone would’ve said that they are casting a plus-sized actress or a plus-sized model was walking the runway, instead of appreciation, there would be a whole lot of fat-girl jokes which really need to die. S

Shikha is one of the few actors that truly stand out because of all the roles she has picked. All her roles have her breaking all stereotypes and refusing to conform. She started out with Wake up Sid and has non-mainstream movies like Dil Toh Baccha Hai Ji and Midnight’s Children in her kitty. She will now be seen in her web series debut Gormint and will also be a part of Coolie No1 with Sara Ali Khan.

The Amazon Rainforest Is Burning To Ashes And The World Couldn’t Care Less. Good Thing These Celebrities Are Changing That!(Opens in a new browser tab)