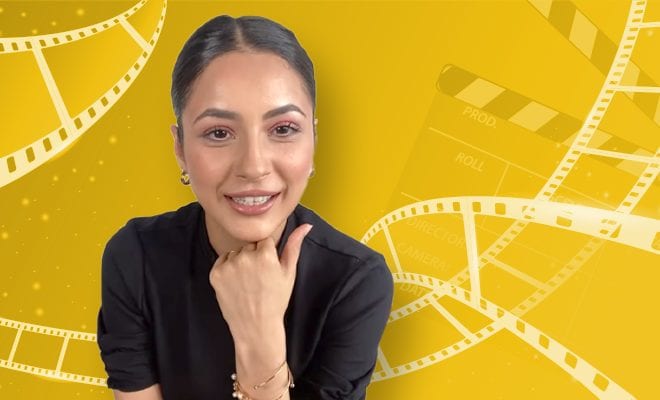 Growing up watching Bollywood movies, there was a question that always pricked my mind—Why are actresses so thin? Is that how women should be even in real life? Being on the heavier side, I always thought that getting slim is the only way that I’ll be a part of society. Because that’s what they show, don’t they? There are hardly any representations of women of different sizes and to top it off these movies encourage being size 0. If you think that it is just the outsiders who think this way, then you need to think once more. Time and again, actresses have spoken about having to reduce weight and look a certain way to get work in the industry. Shehnaaz Gill is one of those.

Recently, Shehnaaz Gill in a YouTube live chat spoke about how she had lost weight in order to get accepted in the film industry. From sharing her diet routine to talking about her future projects, the Bigg Boss 13 participant also spoke about her journey of weight loss.

When a fan commented saying that she looked prettier during her days in Bigg Boss, Shehnaaz agreed that her look at the time has been her favourite look so far of herself and she can get back to that look if she wants to by eating a lot more. She also added, “I can be that Shehnaaz anytime. However, then I won’t get much work. Industry mein patli ladkiyan chalti hai.”

Also Read: Shehnaaz Gill Makes The Most Basic Outfits Look Cool AF. Here Are All The Looks We Love

She also joked about how her team would rather prefer the event to be scripted but she wanted it to be free-flowing. And as you’d expect any live event to go, a lot of people asked her for tips and tricks on how to lose weight. It was during this that she emphasized eating consciously. She said, “My team keeps telling me to stop taking sugar and salt. But all that is bakwas. It’s important to keep a check on the quantity. You soon get into the habit of eating less and that’s the key to shed the extra weight.” She also shared her diet routine which consisted of having moong with tea for breakfast, dal chawal and sabzi for lunch, and just milk for dinner.

She also mentioned that working out and regular exercising is the key to a fit lifestyle. And even though she heavily depends on her diet for fitness, she wants to start working out soon not just for a slim body but also for a healthy, fit body.

When asked about her struggle days, Shehnaz fondly remembered working hard for where she has reached currently in life. She said, “I never stopped and worked so hard to get the fame and money I deserved. I have put in a lot of efforts over the years, and now I want only the best for myself.”

She ended the live chat by talking about the importance of self-love. The 28-year-old actor correctly said, “It’s best to love yourself. Only then can you love anyone else.”

While the live chat was all shades of interesting, what fascinated me is the fact that things have not changed as much as we’d like to believe, especially in Bollywood. Even though there are actors, directors, and producers promoting self-love and speaking up about body shaming, the truth remains that the film industry still has failed to show any strong representations of other body types.

For the new age of Bollywood, a representation of women and men with different bodies, colours, and genders is a good starting point. We need a film industry that just doesn’t talk about acceptance but also practices what it preaches. It is only then can we think of a change in society.

Rupali Ganguly Took A Sabbatical From Work Because She Gained Weight After Giving Birth. Postpartum Bodies Need To Be Normalised