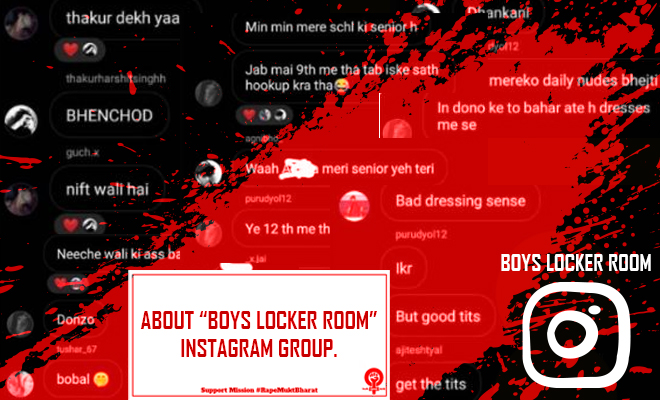 Screenshots Of This Group Chat On Instagram Expose Young Boys From Delhi Discussing Girls, Their Bodies And Rape Threats. This Is So Worrying

We’ve talked endlessly here on Hauterfly about how women are unsafe during the lockdown. The increased threat of rape and domestic violence looms large. But even as the nation dealt with the repercussions of an extended lockdown, a shocking image of its youth came to light. These screenshots shared on Instagram by major influencers , was about a group called ‘Boys Locker Room’.

You can already tell no good is going to come out of it. But you expect the conversation about women who the men think are hot or you know, sexy. But that would be decent.

In this group are young boys and girls, barely 16 or 17 belonging to reputed Delhi schools. And this entire group was created solely to degrade women and talk about their bodies. Some of the photos shared were of underage girls.

What followed was an onslaught of re-shares, posts, and tweets from thousands across Instagram and Twitter. This reaction is unsurprising. But we are shaken. Earlier, an incident of this kind had happened in Mumbai, where a bunch of guys discussed women in the worst possible way. But it’s like this won’t stop.

I have never in my life been so furious. These shameless fucks are not even slightly guilty about what they’ve done. They’re going around and hacking our accounts now. NOTHING CAN OR WILL STOP US. #boyslockerroom

It took no time for active social media users to make this story spread like wildfire. The usernames of the boys involved were revealed and posted everywhere. While thousands came out in support of the girls and expressed their concern over the incident, there were many who disagreed and others still who simply played the devil’s advocate. Later, more screenshots were shared where the members of the group chat were seen not only defending themselves and their actions, but also threatening to ruin the girls lives and rape them. Attempts were made to hack the girls Instagram accounts.

Thread: Students who are 16, 17 years old, are casually talking of gang raping girls and women, swapping nudes without the consent of these women on Reddit, with not even a hint of fear of exposure. The dire crisis of rape womxn face, starts with this rape culture #boyslockerroom

Despite all of this, some continued to defend the boys, saying that their names should not have been revealed, and that an accusation like this would ruin their lives. Their friends, including women, have not hesitated to support them. And of course, there were those who openly blamed the victims by saying that girls should be more careful about what they post on their social media.

Some of the boys issued apologies, but the problem does not end there. This incident has once again sparked the debate about rape culture in India. ‘Locker room’ conversations, rape jokes, and derogatory comments about women’s bodies are more often than not overlooked and brushed under the carpet. We don’t consider this mentality to be an issue until it manifests itself as sexual assault and abuse. And even then, so many of us are silent. Online spaces are becoming increasingly unsafe for women, especially young girls. Body shaming, creepy comments, and threatening messages are everyday battles. Why should we be asked to cover up more and fight back less?

every man is part of the problem if they don't do anything to stop this. every man is at fault. #boyslockerroom pic.twitter.com/6VvB4UrUaP

So, we are saying teach the boys better. Raise them better. And don’t dismiss this as a joke, because it’s not funny.

Boys will only be boys until we start teaching them otherwise.

Dudette With Sign Schools Everyone On The Concept Of Female Sexuality, Consent And We Absolutely Love Her