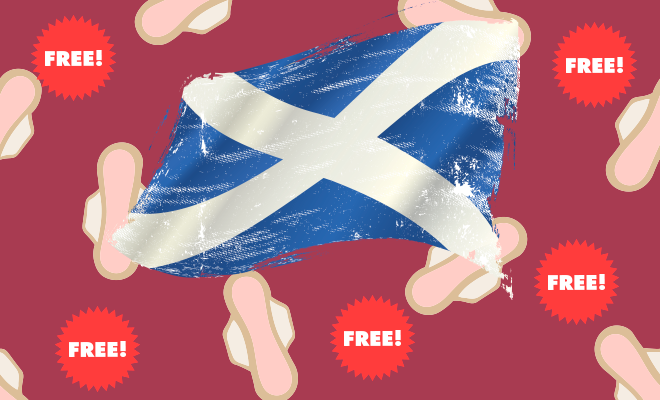 Scotland Becomes The First Country To Make The Sanitary Products For Women Free Of Cost. What A Lovely And Important Gesture!

The thing about becoming a working adult, and by that, I obviously mean the bad thing, is that it means you can no longer not pay for stuff. It is the time when you’re figuratively and literally actualising into the reality of the phrase, ‘there are no free lunches in the world’. All the while working odds and ends, skipping season end sales, and switching from fancy woks to cup noodles just to make the rent money. And with such heavy expenses already on board, when you also realize you have to pay extra for being born with a vagina you just decide to become a dripping blood bank every month. Let’s just say your wallet starts to resemble the emptiness in your love life. And this for the ones who have a sound job, and well a few fancy habits, let alone the section of women who are currently still struggling for work and a decent living.

But seems like the women of Scotland need to not worry about this. For their government (unlike many others) have finally pondered over and granted them a consideration on the matter, after deciding to make sanitary products free of cost for the women of their nation. Earlier this week, as the Scottish Parliament revealed its plans for this move, it also became the first country ever to do so for their women. The fact that the bill that was passed with 112 votes in favor of it and none against, was pretty telling of the mindset and priorities of the nation.

In what has come as an early women’s day present for the women of Scotland, we are more than surprised and impressed with this gesture by Scotland, which has sought to not just acknowledge but also take initiative in addressing the problems of sanitation during menstruation. Especially at a time when women and young girls are dropping out of schools due to lack of funds to buy sanitary products.

Scotland will be the first country to provide free tampons and pads at public places 👏👏👏https://t.co/uxId7vX4SQ

Also Read : In Kenya, Young Girls Are Dropping Out Of School Because They Don’t Have The Funds To Buy Sanitary Pads. This Is Just Sad.

As the majority of the women population suffer from this monthly dilemma, that is just as strenuous on the pockets as it is on the abdomen, we are thrilled to find out that at least one nation has decided to move in a direction that enables its women and not take away from them. The legislation on the rule states that designated public places such as the pharmacies, community centers and youth clubs would be equipped with free sanitary products such as pads and tampons, which would then be made available for the women free of cost.

What a wonderful initiative! #Scotland definitely deserves a round of applause! Sanitary products should be free and available to every woman in every country.
https://t.co/UtJW6nEj97

Sources suggest that the entire process to make sanitation for women free is likely to cost the government about 31.2 million dollars. A price that may seem huge, but is all the while worth it. This makes the women feel and live safer as far as their menstrual cycle is concerned. It is the taxes that otherwise make the products so expensive. and basic sanitary products often fall out of reach of half the population still living on daily wages. This gesture from a government like Scotland, that has made us only honour them more.

The bill sponsor, Monica Lennon commented on the matter and said, “The legislation is a milestone moment for normalizing menstruation in Scotland and sending out that real signal to people in this country about how seriously parliament takes gender equality.” We think it has come across as a rather progressive step in normalising and breaking past the taboos that are built around menstruation. Not only would this initiative ensure safe and hygienic products to all women, but it would also help many underprivileged women get access to an amenity that is as basic as a sanitary napkin.

We hope, other countries too, seek to learn from Scotland and follow suit!

Also Read : Bras And Sanitary Pads May Be Offensive To Some But They Are Being Used As Masks In China During The Coronavirus Outbreak. Who Would’ve Thought?