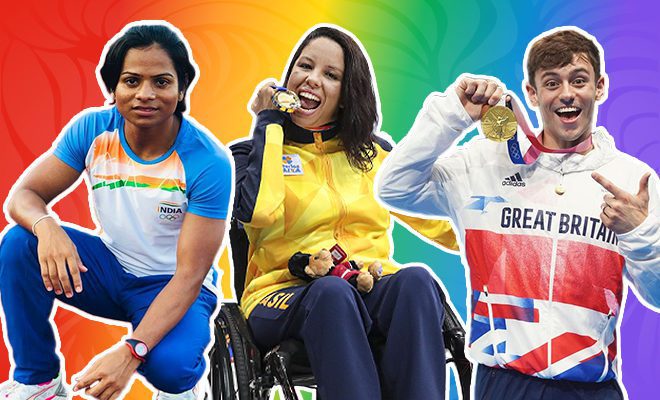 2020 Tokyo Olympics And Paralympics See Record Number Of Openly LGBTQ Athletes. This Is Such A Win!

The world was a much better place when it was more open, both geographically and in terms of thought. Unfortunately, that was one are that, as humans, we regressed in instead of progressing. Fortunately, through the relentless efforts of those who want to this to be an inclusive and accepting world where no one is afraid to be who they are so that they can achieve their full potential, we’re finally seeing substantial change. At this year’s edition of one of the biggest sporting events on the planet, i.e. the 2020 Tokyo Olympics, we saw a record number of 185 openly LGBTQ athletes competing, which resulted in some 32 medals won. And now with the Paralympics going on, there’s another record number of 30 paralympians competing in Tokyo right now,

According to the blog Outpost, on the sports blogging network SB Nation, these numbers are three times than what was seen at the 2016 Rio Olympics (56 athletes) and double of the number at the Rio Paralympics (12 athletes) in 2016. No wonder, the 2020 Tokyo Olympics are being dubbed as the ‘rainbow Olympics’ with publicly out gay, lesbian, bisexual, transgender, queer and nonbinary athletes competing in it.

How do they decide who gets included on the list? Well, for starters, the sportsperson would have to have publicly come out as LGBTQ to the media, or at least are out on their social media that they’re in a same-sex relationship or living their life as an LGBTQ person.

The Outpost blog did a fantastic job of compiling a list of out Olympians for the 2020 Olympics and Paralympics, enlisting the help of former Paralympians, fans, journalists for the same. Since they were able to reach out to most contacts in United States and Great Britain, that’s where their top numbers come from—both have nine out LGBTQ Paralympians competing. Other countries in the list include Canada (3), Australia (2), Germany (2) and Brazil (2). Another noteworthy observation is that on both the Olympics and Paralympics lists, women LGBTQ athletes outnumber the men.

India’s Dutee Chand made it to the list. The sprinter became the first openly out athlete when she revealed that she was a lesbian in 2019. The Indian government’s decriminalisation of homosexuality in 2018 was what encouraged her to speak up about her sexuality, for which she also faced severe backlash.

The record number of out LGBTQ athletes at the Olympics is definitely a huge win for inclusivity. But even more, it speaks volumes about how sportspersons are beating the stigma that most cultures attach to queerness. This stigma even now continues to discourage many athletes from coming out because they’re afraid they won’t be taken seriously, bullied or not be selected to represent their country at such prestigious events if they come out.

In fact, according to CNN, who interviewed researchers that study LGBTQ representation in sports, this current number we see should’ve been higher. Less than 2% of the total 11,000 athletes who participated in the Olympics identify themselves as LGBTQ, because of the above mentioned stigma. This can be more difficult for LGBTQ Paralympians because they have to deal with double the stigma of being persons with disability and being queer, and therefore, might not be considered good enough to represent your country.

Olympic Gold Medalist Tracks Down The Woman Who Helped Him Get To The Stadium In Time. This Is So Wholesome