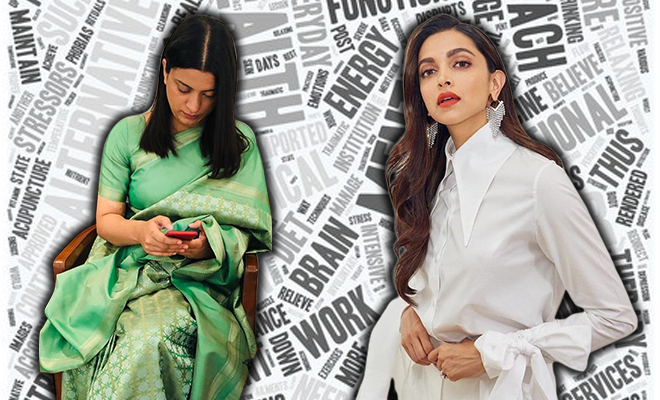 As a writer who write articles about current affairs, one of the things that inadvertently starts happening is that my laptop has innumerable websites or tabs open, especially when I am writing out a story. I alternate between these tabs, checking facts, confirming the details and in my case – a tab with thesaurus is always there – considering there’s that many times you can use the same words in a story before it starts to get boring. So naturally, when today I was busy finding synonyms to the word ‘controversy’, I was kind of bummed to not have found the name ‘Rangoli Chandel’ among the suggestions. Because at this point, nothing can do them part. Especially after the recent dig Rangoli Chandel took at actress Deepika Padukone. No, Deepika didn’t do anything to warrant this reaction. But you know Rangoli, anything will set her off.

During an event, the Padmaavat actress was being asked about her take on mental health, considering Padukone had been one of the first in the industry to open up about her own struggles with mental health issues. So when the actress was asked about what she felt about Kangana’s movie, Judgementall Hai Kya,  Deepika said, “When we have films like Mental Hai Kya, and we have posters in a particular manner, we have to be more sensitive. Because we are working towards de-stigmatizing mental illness, and on the other hand, they are stereotyping it.”

Also Read : Rangoli Chandel Called Out Priyanka Chopra For Her Appreciation Of Greta Thunberg. This Woman Needs To Stop

And while we may not find anything wrong in what she pointed out and many missed on seeing during its release, it didn’t go unnoticed by Kangana’s now infamous sister, Rangoli Chandel. Deepika Padukone, went on to explain what she meant, “Mental illness wasn’t made to be understood for so many years. We shouldn’t stereotype it. We’re not going to progress that way. I think that is where we need to be a little sensitive.” In fact, the title of the movie was in a bit of a soup actually for stereotyping mental health concerns with a tag people often use to dismiss behaviour they can’t understand and we could relate to where Deepika was coming from.

But clearly, it wasn’t something we could say about Kangana Ranaut’s sister, Rangoli Chandel who stepped in to do what she does best – take offense. In what were a series of absolutely unnecessary tweets, Rangoli has gone ahead to condemn Deepika and called her opening up about mental illness an ‘act’. She wrote, “Kangana makes highly acclaimed film on Mental illness magar usse bhi problem hai… wah!! Achcha hai tum logon jaise classy nahin hai, Kangana still feels we must normalise word Mental…”

And that wasn’t all, Rangoliwith her natural trend of deploying several tweets at once, further wrote, “Sorry Kangana ko depression ka natak nahin aaya, heroes ke kachche media ke samne nahin sukhaye, instead she played a mental illness patient to perfection made a film on illness and prejudice around it…”

She also added, “Kitni naadaan hai, image nahin bana payi public aur media ko ungaliyon pe nahin ghuma payi, bas honestly apne kaam mein lagi hai, us se jayada stupid koi hai? Khelne wale toh khel rahe hain,” and at this point we are not quite sure what to make of it. Because first of all, whose kacche are we talking about? And secondly, how is this even remotely about mental illness?

Had she stuck to her argument of how Kangana is of the view to normalise it, we would’ve still made attempts to understand her. But by taking personal digs at yet another actress, she’s lost us completely. To the point we don’t even want to decipher what is it she wants to say. Guess that is what happens when you cry wolf too many times, people eventually stop paying heed.

Also Read : Taapsee Pannu Hits Back With A Heartfelt And Befitting Reply To Rangoli Chandel On Saand Ki Aankh Casting