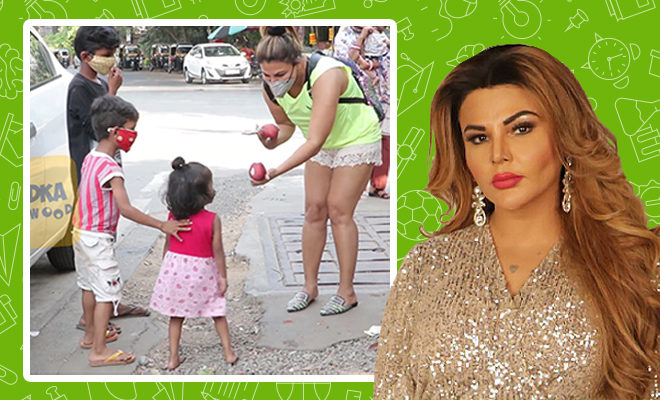 There are a few things that can cheer me up when I am feeling blue. Binge-watching FRIENDS, ice cream, my best friend and taking a walk. However, during these pandemic times, I have realised there is one more thing that does the trick. Watching random videos on social media. Specifically, Rakhi Sawant videos. No matter how you feel about her, you have to agree that she is extremely entertaining. From her calling out to Bigg Boss to show just how many vessels she’s washed to her infamous Mike Tyson video that she made while sitting on the pot seat, her Instagram is the place to be if you need cheering up. Recently, another video of hers has gone viral. It’s a paparazzi video in which she is buying fruits for needy children and telling them not to beg. It’s actually kind of sweet but towards the end, it gets absolutely hilarious!

On Monday, a pap spotted Rakhi Sawant out and about buying groceries and talking to underprivileged children. She’s near a coconut seller’s stand and she buys each child an apple and some coconut water. While this is a noble gesture, especially considering the hard times we are living in, Rakhi started telling those kids to not beg on the streets. After telling them to study and then work, she asks about their family. One kid tells her that she has numerous siblings. This irks Rakhi who tells the child to tell her mother to stop having more children. While she has a very, very point the way she said left us in splits.

Also Read: This Italian Man Walked 450 Kms To Cool Off After A Massive Fight With His Wife. We Think It’s Funny

It’s no secret that India, specifically Mumbai, has a huge beggar population of whom large numbers are children. Instead of enrolling them in schools, their parents deploy them at traffic signals to beg for money. It’s the unfortunate but seedy underbelly of the city. Rakhi has an excellent point but you can’t deny she is just too funny.

#Trending: Star Kids Are Being Compared To Commodes In This Twitter Thread. It’s Funny But Also Rude