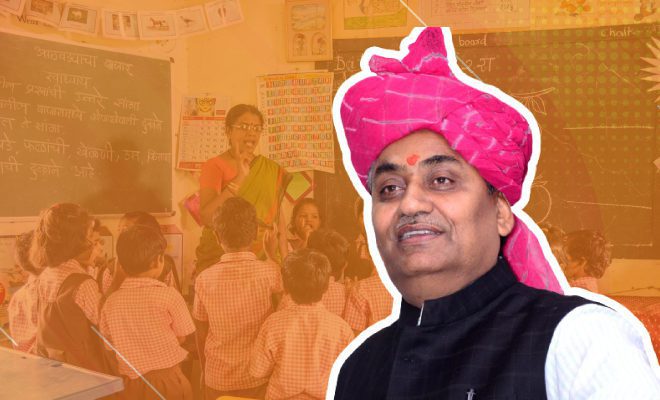 I’ve often come across the stereotype that says women fight a lot. Whether it is a local train or workspace, women are seen fighting with each other. And I admit that the stereotype is based on some sort of truth. But then have you taken a minute to think about why that is? Let me present you with a reason. The reason why women fight a lot with each other, especially in the workplace – is because of the patriarchal system we live in. The patriarchal system that we live in turns woman against woman. Any woman at any workplace is looking for growth and power positions. However, there are limited seats of power for them since most of them are taken up by men. Naturally, it becomes a ruthless competition. So, when the Rajasthan Education Minister said that there are more fights in schools with more female staff, maybe the problem isn’t ‘women’ per se, but the patriarchal upbringing most women have that pits them against each other.

Rajasthan Education Minister Govind Singh Dotasra attended an event to celebrate International Girl Child Day in Jaipur and his speech at the event sparked quite the controversy. In his speech, he said that more quarrels and fights take place in schools where there is more female staff.

The Education Minister further added that the female teachers fight a lot among themselves. Govind Singh Dotasra stated, “As the chief of my department, I must say whichever school has more women staffers, fights are bound to happen for various reasons… If you correct these small things [mistakes], you will always find yourselves ahead of men.”

According to the reports, Govind Singh Dotasra, the Rajasthan Education Minister, went on to say that the Congress-led government has ensured that women are comfortable and secure in Rajasthan. He even added that they have given women preferred posting in jobs. He said, “We have given preference to women in jobs. People recognize that we have posted maximum women in and around the cities.”

Sir isn’t exactly wrong. Yes, we need women supporting women because it is only collectively that we can overcome the oppression that keeps us down. But something tells me, the way men talk about women, the way they word their sentence and speeches, and eventually come to apologise, that needs to change primarily.