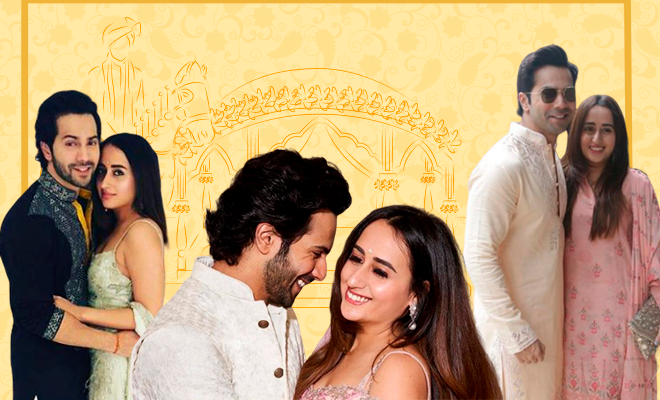 We’ve been spoilt with back-to-back A list weddings! Anushka Sharma and Virat Kohli, Sonam Kapoor and Anand Ahuja and Priyanka Chopra and Nick Jonas, Deepika Padukone and Ranveer Singh gave us so much to be excited about. And it feels like we need more of these, so we have our eyes on the potential Bollywood weddings out there. So when I heard about Varun Dhawan and Natasha Dalal tying the knot this summer, I got super excited.

Now I am not going to keep my hopes very high because in 2019, they said Sushmita Sen and Rohman Shawl will have a winter wedding but clearly, they didn’t. However, this time, the info seems to be coming from a legit source. A producer close to Dhawan spilled the deets on their wedding and apparently, it’s going to be a week-long summer wedding. “Apparently, Varun and Natasha are planning to get married in May this year. It will be a grand summer wedding, spanned over a week, with all the events including Mehendi, Sangeet and Reception—and mostly in Goa at a luxury hotel or beach resort, the way his brother Rohit had got married eight years ago to Jaanvi at Park Hyatt in Goa.”

The source further added that the couple have already asked their friends to save the dates, “ A few Bollywood bigwigs have been informed to keep some dates between the second and third week of May for Varun and Natasha’s wedding free, though those dates too are being a closely guarded secret. But it won’t be a secret wedding like Deepika Padukone and Ranveer Singh. For Varun’s wedding, it will be band, baaja and baraat for Bollywood!”

David Dhawan’s Coolie No. 1 is slated to release on 1st May, 2020 so it’s going to be an eventful time for the fam. The source revealed, “It’s a big and very important film for David, Varun and Rohit as they are producing it too with Vashu Bhagnani. They will pull out all the stops for the marketing and promotion of the movie from March onwards and once it releases, there will some time on everyone’s hands to throw a wedding. Varun’s birthday is on April 24 and his wedding date may be announced on that day as it’s a special day. Though Varun has signed Shashank Khaitan’s comic thriller, Mr. Lele, which may start in March, he may get some time off in May, post the release of Coolie No 1. Apparently, Varun is working around those dates so he can take some time off and get married and then go for a honeymoon.”

Spilling deets on their outfits, the source said, “Designer Manish Malhotra, who is very close to Varun and his family, may design his wedding outfit. Natasha is an extremely talented designer who owns Natasha Dalal Label which specialises in bridal outfits so she may design her own wedding one.”

Last year, a little birdie did reveal that the couple is planning on having a Goa wedding but we didn’t know it would be this summer. They seem like such an ideal couple and I am super stoked! In an earlier interview, Varun had expressed, “Where me and Natasha are concerned, I think, eventually, after we get married, we are together all that stuff, she has to, she has her own individuality. That’s why I’m with her because she has her own individuality, she has her own voice which is super strong with things she wants to do and things she wants to achieve in life. And, as her partner, that is something I want to support, you know. And, she has been so supportive where my career is concerned, always, from day one actually.” I guess we will just have to keep our eyes on this one and see if this piece of news is true!

ALSO READ: Varun Dhawan and Natasha Dalal To Tie The Knot This Year, And We Have All The Deets!