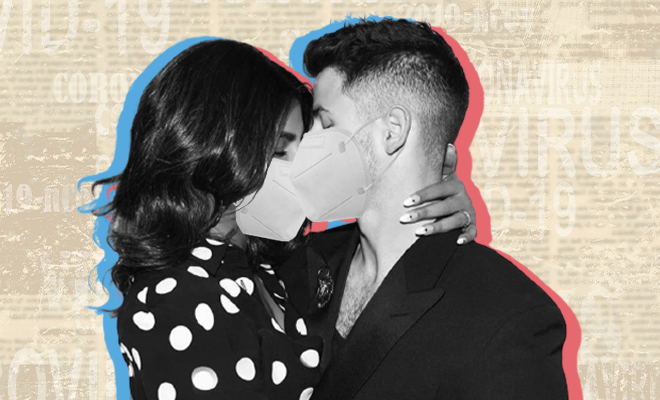 Priyanka Chopra Jonas Talks About How She And Nick Are Taking Extra Care During Covid, Since She Is Asthmatic. This Takes Us Down The Memory Lane..

2020 is a tough year for almost everyone right now. From students, to businessmen, to women, all kinds of people are facing their own troubles, hoping by the time this year ends, so does their misery. And one such troubled section is also the Bollywood industry, which is the most trickiest place to be in right now. With the ongoing controversies, blame for nepotism, and a brutal game of throwing each other under the bus, it is safe to say that there are no current favourites that we have at the moment from the film industry. Except, maybe Priyanka Chopra Jonas, who has always managed to stay in the clear, sticking to her truth. Apart from the one time where she endorsed a no cracker campaign, talking about her asthma, only to later be caught smoking on a yacht. And seems like, her recent statement has pulled on that thread, once again.

Currently quarantining with the pop star and husband, Nick Jonas, Priyanka is supposedly spending this time of the pandemic ‘somewhere in Europe’, trying to be extra safe and cautious about their health. Talking about how the both of them are very sensitive when it comes to contracting infection, she said, “We’ve been very, very safe actually, because Nick is Type 1 [diabetic], and I’m asthmatic. So, you know, we’ve just been super careful about who we interact with and how we do it.”

And while it is appreciated that people, especially influential celebrities like Priyanka Chopra Jonas who is a favourite with the Indian audience, are taking proper and full precautions to shield themselves during this time of corona, her words did take us back to the incident when she was called out for her hypocrisy as she chose to smoke on a yacht, while otherwise talking about the seriousness of her asthma.

Also Read : Priyanka Chopra Smoking In Front of Mother Is So Unrelatable. Our Mother’s Would Sunao Us!

This happened last year in July where the actress was spotted spending time with husband Nick Jonas and her mother, who too was seen smoking a cigar. One of the most asked questions that picture raised on the internet was, ‘How could she smoke when she had said she suffers from asthma?’. This also came soon after she had done a campaign with Cipla, appealing to Indians to refrain from burning crackers. Oh well, the irony, thought the internet.

This time around, the context is however different, and as Priyanka Chopra talked about taking extreme measure to mark herself and her husband safe from a virus like Corona, we hope it isn’t followed by an image of her smoking. After all, as much as one has the right to choose their own lifestyle, in a position like hers, it also becomes important to not take a hypocritical stand.

Priyanka Chopra choking on the smoke caused by crackers! pic.twitter.com/pAucZTEXqU

Talking more about her life in quarantine, Priyanka Chopra shared, “I’ve been doing a lot of developmental stuff and producing a bunch of work, so actually quarantine has been very, very productive for both me and Nick.” She also talked about the perks that came with working from home and said, “I don’t miss being stuck in traffic and going to meetings. I’m actually really grateful to be able to wear sweatpants with, like, a formal shirt and, you know, do an interview.” And to that, we all relate and how!

Also Read : Nick Jonas’s Picture Of Him Smoking A Cigar Got People Worried For Him. We Think People Need To Calm Down With The Fake Concern